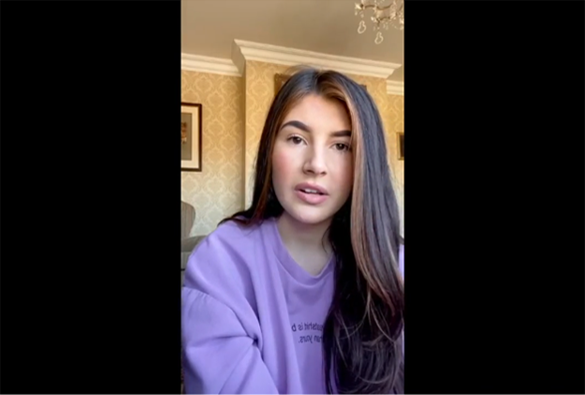 To mark Poetry Day Ireland 2020, the University of Liverpool’s Institute of Irish Studies is delighted to present videos of students and academics reciting poems in both the Irish and English language.

The Institute is a champion of the Irish language in Britain and currently leads two three-year projects, sponsored by the Irish government’s Department of Culture, Heritage and the Gaeltacht, offering beginners and advanced Irish language classes.

The first programme is directed towards students enrolled at the University of Liverpool, from across the disciplines, and the second provides evening classes in London in association with the Institutes’ London partner, the Irish Cultural Centre in Hammersmith.

Below, Professor of Irish Literature in English, Frank Shovlin reads a poem by the late poet Anne Kennedy, from her first book Buck Mountain Poems. Anne left the San Juan Islands, off the coast of Washington state, USA in 1977 and moved to Galway, where she lived until her death in 1998.

Dympna, an Irish language student at the Irish Cultural Centre, is originally from Tipperary but moved to London with her parents at the age of 12. She was always very keen on languages and decided she wanted to learn her own native language before exploring others. Dympna has been learning Irish for a number of years, with the ambition to write her own stories in Gaelic.

Watch below as she recites Fill Arís by Seán Ó Ríordáin. Dympna says she chose the poem as it relates to her own desire to discover her own voice in her own language.

Paul O’Neill, is also an Irish Language Student at the Irish Cultural Centre. Paul, who is second generation Irish, has chosen to read An tEarrach Thiar, by Máirtín Ó Direáin, because of his family’s connections to the West of Ireland.

Paul’s mother is from Connemara, and he started to learn Irish in order to converse with her in her native language. He is very proud of his Irish connections – his father is from County Derry.

Paul and Dympna are joined by Anne Thornton, another Irish Language Student at the Irish Cultural Centre. Like Paul, Anne is second generation Irish. Both her parents were native Irish speakers from County Mayo, and she has fond memories of hearing her mother speak Gaelic in the home. As a child, she spent many summers in County Mayo and recalls frequently hearing the Irish language being spoken. With so much of Irish culture being connected to the language, she decided to try and learn it herself.

Our final video, for Poetry Day Ireland 2020, is from Orlágh O’Neill, a history student at the University of Liverpool who is also taking Irish language classes – alongside her undergraduate programme – at the Institute of Irish Studies

Growing up in Country Donegal, Orlágh was surrounded by the Irish language but didn’t have the opportunity to study it in depth until moving to Liverpool. Orlágh feels it is important to do so to enhance her understanding of Irish Culture. She is also excited at the prospect of being able to converse in Irish.  Orlágh O’Neill is reciting Anois Teacht an Earraigh by Antaine Ó Raifteirí.