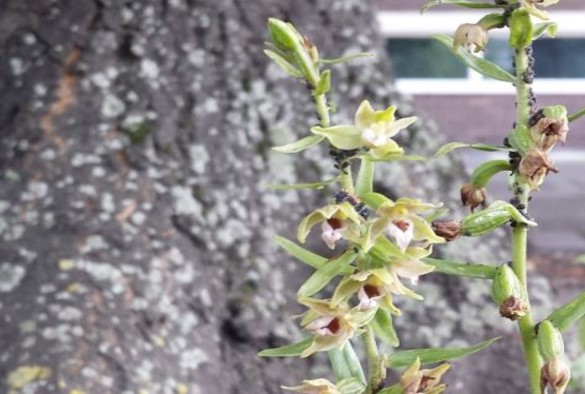 Rare orchid plants unique to Britain and usually found in coastal dunes and woods have been found growing on the University of Liverpool’s city centre campus.

Dr Raj Whitlock, Senior Lecturer in Evolution, Ecology and Behaviour said: “I’ve known these plants were there since 2015 but had initially assumed they were a more common species called broad-leaved helleborine. Connie Webb, an undergraduate student working in my research group, carried out DNA sequencing work to verify the identification of these plants. This revealed that our orchids were the much rarer dune helleborine.”

The dune slacks and coastal woodlands at nearby Sefton and Ainsdale are a global stronghold for this species, but it also lives inland on a wider range of habitats. It is currently categorised as a British endemic, meaning that it is thought to occur nowhere else except the British Isles.

“Our study has revealed the hidden and incredible biodiversity present on our University campus. We think our discoveries probably represent the tip of the iceberg, and that we’ll find more fascinating plants and animals as we complete additional surveys,” said Raj.

As Chair of the University’s Biodiversity Action Group (part of the Sustainability Board) Raj is keen to foster biodiversity on the campus. A review of how green spaces on the Liverpool campus could be managed to better support biodiversity is in progress.

Raj says: “We have recently identified several large grassland areas on the campus that will be allowed to develop into wildflower meadows. There will be many benefits to this. Not only will they look stunning, with hundreds of bee orchids on one site, they will also support a wide diversity of other plant species, bees, butterflies and other pollinators and invertebrates that depend on the plants, and birds and other animals higher up the food chain.

“There are clear wellbeing benefits for people when high quality, biodiverse green spaces are included in urban environments. This means that simple, low cost interventions, such as changing mowing schedules, can drive win-win outcomes for both people and the planet.”

Syd Cottle, Director of Estates Management said: “We are delighted that this rare orchid has been found on campus and we are grateful to Dr Whitlock for his discovery and for chairing the Biodiversity Action Group – one of seven new sustainability groups made up of academics, students,  professional services and the Sustainability Team. Working with the group we are currently trialling a relaxed mowing schedule to enable wild flower and grass meadows to grow around campus to support our precious insects and pollinators and to make space for nature”.

This work aligns to the ‘Life on Land’ UN Sustainable Development Goal.