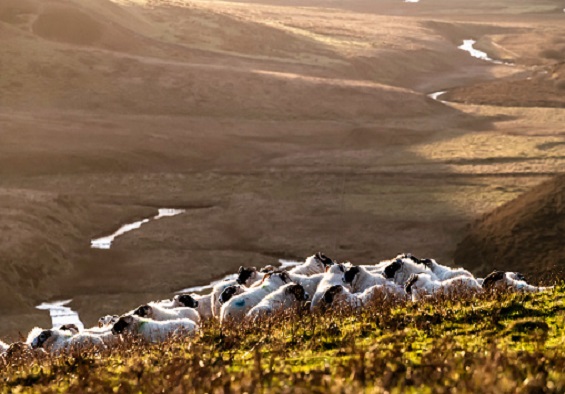 A new study by the University of Liverpool has found that sheep grazing does negatively affect the diversity of plant species of upland areas of the British countryside, and it could take up to 60 years to recover.

The impact of sheep grazing (and indeed other livestock) on the diversity of plant species in the British countryside has been a subject of debate for many years. Often referred to as “white-woolly maggots” or “hoofed locusts”, the renowned ecologist, Frank Fraser Darling, coined the phrase `wet deserts’ to describe species-poor vegetation of the Scottish Highlands and in an article for the Spectator in 2013, George Monbiot described the British uplands as ‘sheep-wrecked’.

An innovative research study, led by Professor Rob Marrs and Professor Richard Chiverrell from the University of Liverpool’s School of Environmental Sciences, sought to confront this thorny issue using as series of long term ecological experiment to analyse the vegetation; each experiment compared two adjacent plots of land at the Moor House National Nature Reserve, one of which had been used for grazing sheep and the other plot which had not.

They tested and compared the leaf properties of seven focal species that occurred only, or were present in much greater abundance, in the plot of land absent of sheep grazing to those of ten common species that were common in both grazed and ungrazed vegetation.

Their findings, published in the journal Annals of Applied Biology, revealed that vegetation from the non-sheep grazing plot were more nutritious (with greater concentrations of both macro-nutrients, up to three times more nitrogen and phosphorus and some micro-nutrients (Copper and Manganese), and were found to be have greater digestibility, palatability and they decomposed faster than the common species.

University of Liverpool ecologist, Emeritus Professor Rob Marrs, said: “Our findings confirm that the “white woolly maggots” have indeed eaten at least some of the heart out of the uplands.  With the reduction or removal of  sheep these landscapes can recover, but our long-term monitoring showed it can take up to 60 years for these focal species to increase.

“This research also emphasises the need for long-term manipulative ecological experiments, the experiments studied here were set up between the mid-1950s and the early-1970s and I have been working on them on-and-off for almost 40 years!”

University of Liverpool environmental scientist, Professor Richard Chiverrell said: “As a society we must be in it for the long haul if the rewilding/wilding of our uplands with sheep removal is to produce substantive improvements in biodiversity without some seed addition and active management.

“You can see examples where this approach can help with the introduction of heather brash and seedstock to aid more rapid post fire recovery on Saddleworth Moor.”

Moor House National Nature Reserve in the North Pennines is a site in the UK’s Environmental Change Network. The experiments are included in the Ecological Continuity Trust’s register of important long-term experiments.

This research was co-funded by the Leverhulme Trust and the Heather Trust.

The research paper `Release from sheep-grazing appears to put some heart back into upland vegetation: A comparison of nutritional properties of plant species in long-term grazing experiments’ (DOI: 10.1111/aa b.12591) is published in Annals of Applied Biology.

The research was a team effort involving two field-survey teams (Prof Marrs and postdoc Dr HyoHyeMi Lee from the National Institute of Ecology, Seocheon-gun, Republic of Korea, and Rob Rose and John O’Reilly from the UK Centre for Ecology & Hydrology’s (Lancaster) Environmental Change Network); the Data analysis team (Professors Marrs and Smart of CEH Lancaster), and Professor Chiverrell who led the X-ray fluorescence and Near Infra-Red Spectroscopy (NIRS) analyses.

Professor Marrs added: “A critical role was played by members of our Professional Services Staff who provided analytical expertise – Les Connor (macro-nutrients), Mike O’Connor (micro-nutrients) and Sabena Blackbird (carbon and nitrogen), Suzanne Yee produced the artwork, plus Dr Susan Girdwood from IBERS, University of Aberystwyth, an expert in animal nutrition who decoded the NIRS scans. This work could not have been contemplated without the substantial investment in equipment by the University of Liverpool within the Central Teaching Laboratories.”