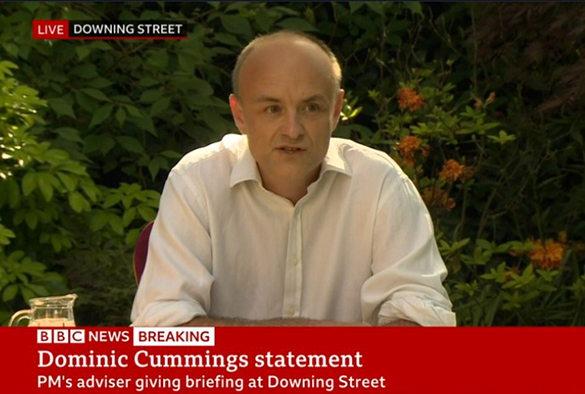 So stated Michael Gove on the Radio 4’s Today programme just after quarter past eight on the morning of Tuesday 26th May. He was, of course, talking about the decision taken by Dominic Cummings, the Prime Minister’s special advisor, to drive his wife and son 260 miles away from their family home in London when he believed himself and possibly also his wife to be infected with coronavirus. Whilst in County Durham, Cummings went on to make a further 50 mile round trip from Durham to Barnard Castle in an attempt, he says, to ensure his eyesight would be OK for the return drive to London. Cummings made his journeys when the government guidance specifically instructed citizens who felt they could be infected to “Stay at Home” and when it was an offence for anybody (whether or not they thought they were infected) to leave their homes except if they had a “reasonable excuse” as set out in the relevant legislation.

A “reasonable excuse” in law?

Presumably, then, when Gove stated that Cummings “didn’t break the law” he meant that Cummings had a “reasonable excuse” in law for being outside of his home for both of the journeys in question. But what could that excuse be? In neither case were Cummings and his family exercising, obtaining basic necessities, donating blood or attending the funeral of a close family member. They were not travelling for the purposes of work, seeking medical assistance or providing care or assistance to someone else. They were not fulfilling a legal obligation or moving house. And they were not accessing a critical public service available to them or trying to avoid injury or illness or escape from harm. According to Cummings’ own account, when they left London he and his wife were trying to make sure that if they should need help looking after their son that the people they would prefer to have provide that help would be conveniently near-at-hand. It takes a significant stretch to identify this reason for travelling with any of the “reasonable excuses” identified in the legislation.

In other words, even before taking their ludicrous Barnard Castle “eyetest” drive, it seems highly likely that in travelling to Durham, Cummings (and his wife) committed offences under the coronavirus legislation. In his 10 Downing Street Rose Garden statement, Cummings sought to suggest that he had an excuse for his lockdown travel by alluding to the government guidance on self-isolating if living with children. This guidance does say you should “keep following this advice to the best of your ability”. However, this relates to self-isolating if you suspect you have coronavirus, rather than to the general lockdown conditions imposed on everyone. Moreover, it is only guidance. It has no status as a legally permissible “reasonable excuse” for not adhering to the rules set out in the lockdown legislation passed on 26th March.

“The law, in its majestic equality, forbids the rich as well as the poor to sleep under bridges, to beg in the streets, and to steal bread.” Anatole France, The Red Lily

However, it is clearly not possible for lawmakers to anticipate or specify in advance every set of circumstances under which a person may come to break the law. This is one of the basic justifications for granting the police discretion in the application of the law. Indeed, when they introduced the lockdown restrictions, the government were keen to stress that the police would apply “common-sense and discretion” in their application.

In stating unequivocally that Cummings has not broken the law, Michael Gove has created an extremely difficult situation for the police, who are already in unfamiliar and uncomfortable territory. Under the coronavirus legislation, the police have the power to issue a fixed penalty notice to anyone they “reasonably believe” to have committed an offence under the regulations. But, it would be a bold officer indeed who would issue that ticket now and thus directly contradict a government minister.

Gove, we are often told, is a “highly intelligent” man. He is also a former Justice Minister. Surely, then, he must be aware that whilst the government and parliament may make the law it is not their place to determine in specific cases whether or not it has been broken and what should be done about it. That is the role of the criminal justice system. In the first instance, this means the police. Cummings’ supporters have complained about “trial by media” whilst delivering their own verdict in tweets and interviews with journalists. This is intensely hypocritical. Furthermore, when people in positions of power (like government ministers) publicly assert that an individual has not broken any rules then their assertions must surely be recognised as having the potential to frustrate (if not “pervert”) the course of justice.

In truth, Cummings is surely only one among many people who will have taken decisions about how to behave during lockdown based on what is most convenient and congenial for them and their family. But, like other public figures whose actions have been questioned at different points during the lockdown period (e.g. Labour MP Stephen Kinnock and Cabinet minister Robert Jenrick) his position has rightly made his actions the focus of intense media scrutiny. What is most striking though in the case of Cummings’s behaviour is that the ensuing scramble to protect him has seen high profile and experienced politicians like Michael Gove make statements that suggest a lack of basic awareness of the content of their own legislation. Perhaps most worryingly though, Gove and many of his Cabinet colleagues have shown a lack of appreciation for the principle that whilst parliament makes laws it is for the police and courts to interpret and enforce them. This creates a truly worrying precedent.