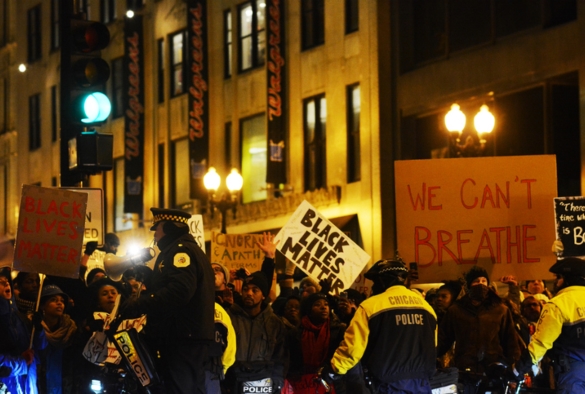 Facing layers of unprecedented crisis and chaos, what is the historical precedent for President Trump’s use of the Insurrection Act of 1807?

By Dr Cheryl Hudson, Lecturer in U.S. Political History at the University of Liverpool.

The brutal murder of George Floyd by a white police officer is just the latest example of ongoing racist violence by an increasingly volatile American state apparatus. In response, American cities – from Minneapolis to Los Angeles, Atlanta to New York – have erupted in rage and frustration. Large crowds of American citizens, black and white, have protested peacefully and with a prevailing sense of horror and outrage as the image of Derek Chauvin’s knee on George Floyd’s neck plays over and over on global media. If Floyd’s death was the catalyst, the peculiar conditions of COVID America served as a receptive environment. Angry young men and women cooped up for weeks in quarantine and facing an uncertain future, with rising levels of unemployment, little trust in their government and few hopes for electoral change, have vented their frustrations on their communities. The power of their moral position has undermined official attempts to quell the violence, but the violence also works to undermine their moral position, especially in the wake of appeals by George Floyd’s family and friends to stop disrespecting his memory by rioting and looting.

President Trump’s response reflects the chaos at the heart of the American state in the age of COVID. Trump responded to pressures in all directions, both pacifying and threatening the rioters, playing to his electoral base, squaring up against Democratic state governors, asserting federal power in a fracturing constitutional system, seeking to recover from the hit that COVID had given his own credibility, and if all that wasn’t enough – taking on Twitter over censorship. His first angry tweet, threatening to send US troops into American cities because “when the looting starts, the shooting starts” was deliberately incendiary as a goad to Twitter to censor him (the platform placed a trigger warning over the tweet). His more conciliatory speech at NASA on Saturday, as the first commercial manned rocket launched, underlined the seeping power of the state as it depended on private capital in the shape of Elon Musk’s SpaceX programme to bolster a flagging space programme .

Trump’s appeal for the restoration of law and order chimes with many Americans but his resort to further threats of force as the rioting continues amplifies his impotence as much as his power. In a badly misjudged speech in the White House rose garden, Trump threatened to invoke the Insurrection Act of 1807 to put down riots and protests. Driven by the impotence of city and state government to deal with the social disorder problem, Trump promised to restore security and safety by bringing federal might to bear against “professional rioters,” “criminals,” “antifa,” and other “dangerous thugs.” He punctuated the promise by ordering troops to break up a peaceful protest in DC with tear gas and rubber bullets, so that he could walk to a nearby church for a photo opportunity.

What, then, is the 1807 Act and how has it previously operated in American history? Does it provide a meaningful precedent for Trump to send in the troops, or to federalise the National Guard, if state governors refuse to deploy them? Introduced during the Jefferson administration, the Act provides an exception to strict limitations on the power of the President to intervene militarily in state affairs. It has been invoked for a number of reasons over the course of the nineteenth and twentieth centuries. In the antebellum period, Andrew Jackson used the powers to put down Nat Turner’s slave revolt in Virginia, and to break a strike in Maryland. In the Reconstruction era, Ulysses Grant deployed US troops against the vigilante Ku Klux Klan in the South and in 1894, President Cleveland sent the US army to Chicago, Illinois to break the Pullman strike. In the early years of the civil rights movement, Eisenhower and Kennedy sent troops to protect African Americans from rioting Southern whites and intransigent state governors; in the late sixties, President Johnson used it to quash race riots in four American cities. George W. Bush was the last President to invoke the Act when he deployed troops to stop the rioting in Los Angeles following the vicious police beating of Rodney King in 1992.

The 1807 Act can legitimately be invoked in only three circumstances: if a state governor requests the president sends troops, which has been the case in the majority of instances of the law’s use; to protect the civil rights of state inhabitants, as was the case for Grant, Eisenhower and Kennedy; or when a state is in armed insurrection against the federal government, a legacy of the Civil War. President Trump has therefore no legitimate reason to invoke the act and deploy the US military. The only instance where a president sent troops against the wishes of the state governor and where there were no civil rights issues at stake was in 1894, when Cleveland crushed a nationwide railroad strike at its Chicago hub. In that case, he was able to claim federal jurisdiction for protecting the US postal service, as railroad lines hastily added mail cars to all of their trains.

Will America invade itself in 2020? It is hard to see how Trump could manipulate the law to allow deployment of US troops in states where governors are reluctant to cooperate. All of the governors he is challenging are Democratic and will remember that the President encouraged their own state citizens to protest against them over the unlocking of the COVID lockdown just a few weeks ago. With the November election looming, it is unlikely they will accommodate Trump’s demands. Trump knows this and is using the confrontation to bolster support among his electoral base, galvanising the law and order vote for November. Trump feeds off domestic division and has been known to blow hot air for electoral gain.

But there might be an even more sinister outcome if the rioting continues. Trump could conceivably resort to the deployment of troops under emergency powers ‘inherent’ in the Constitution, such as those used by Franklin D Roosevelt to intern Japanese civilians during the Second World War. Presidential power has expanded exponentially in the last half-century and George W. Bush’s Patriot Act could allow far-reaching actions against US citizens; Trump’s rhetoric about Antifa as a terrorist organisation indicates a possible move in this direction and would pose a serious challenge to civil rights. One of the many ironies in the age of COVID is that an increasingly weak and ineffective state can extend powers assumed in the 1870s to protect civil rights in order to undermine civil rights, in response to a murderous denial of civil rights, simply because the American people have delegated too much of their power to it.