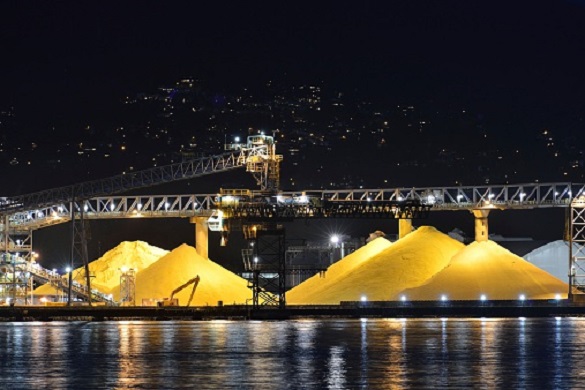 Researchers at the University of Liverpool are making significant progress in the quest to develop new sulfur polymers which provide an environmentally friendly alternative to some traditional petrochemical based plastics.

This new research builds on their game changing discovery in 2019 when they reported a new catalytic process to make polymers out of sulfur.

Sulfur is a waste product from many industrial processes and in recent years a growing number of materials scientists have become interested in using it as an environmentally alternative to oil from which to manufacture plastics. As well as being in plentiful supply, sulfur also has the added advantage of leading to more easily recyclable polymers.

In a paper published in Angewandte Chemie, Dr Hasell and colleagues make an exciting discovery that addresses the weakness of sulfur polymers, a factor that has limited its application.

Led by PhD student Peiyao Yan, the paper demonstrates that adding a second type of bonding, urethane bonds, to the materials increases the strength of sulfur polymers by up to 135 times. The way this second type of bonding is introduced means that its amount can be controlled, and in turn controls the physical properties of the polymers.

The strengthened sulfur polymers were found to have shape-memory effects – they can be set in one shape, before being temporarily deformed into another. When heated a little, they ‘remember’ the previous shape and go back to it. This setting process and temporary deformation can be repeated multiple times.

This is a first for sulfur polymers, and despite these unusual properties, the sulfur bonds of the polymers mean they are still easy to recycle and opens up potential applications in areas such as soft robotics, medicine, and self-repairing objects. This paper is also featured as an article in Chemistry Views.

In a second paper, published in Chemical Science, Dr Hasell’s group teamed up with researchers at Flinders University in Australia to show that sulfur polymers could form rubber like materials that could be easily self-repaired to their original strength within minutes, just by applying an amine catalyst that helps the bonds in the broken surfaces heal back together.

This new kind of rubber and catalyst can be used with low energy consumption to make flexible, repairable, sustainable objects – providing a very real and useful application for these new sulfur polymers.

Dr Tom Hasell said: “Both of these papers really show the potential of polymers made from waste sulfur to be a viable replacement material for some traditional petrochemical based plastics.

“Not only as a substitute material, but as one that is easier to recycle, and has exciting new properties for materials chemists to explore.

“We are excited to see what ideas researchers have for using these new findings, in particular the memory shape and “re-programming” properties.”

The collaborative research between the two research groups in Liverpool and at Flinders was made possible by support from the Royal Society and the Australian Research Council which supported visits and student exchanges. Peiyao Yan was supported through the Chinese Scholarship Council.

The research has benefited from new research facilities at the University of Liverpool, the Stephenson institute for Renewable Energy, and the Materials Innovation Factory.

The paper `Chemically induced repair, adhesion, and recycling of polymers made by inverse vulcanization’ (doi.org/10.1039/D0SC00855A) is published in Chemical Science.