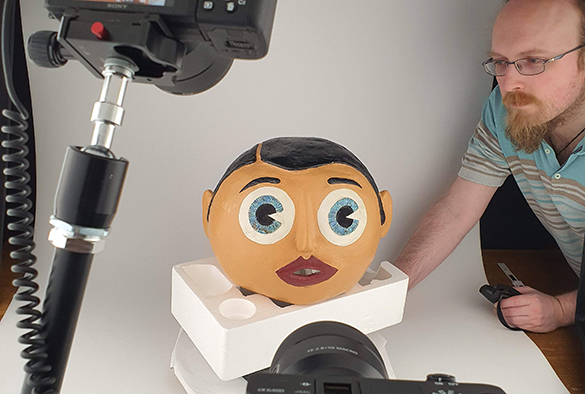 Dr Ardern Hulme-Beaman is a Leverhulme Early Career Research Fellow and Charlotte Sargent is a Postgraduate Research Student in the Universtiy of Liverpool’s Department of Archaeology, Classics and Egyptology

Not all archaeology is ancient, and the Photogrammetry Team in the University’s Department of Archaeology, Classics, and Egyptology has collaborated with Manchester’s Archives+ and 11:37 Enterprises to digitally preserve the iconic head of Frank Sidebottom, the alter-ego of comedian and musician Chris Sievey.

Larysa Bolton, at Archives+, spoke to us about the collection, digitisation, and the man himself: “The thing that is really remarkable about the Chris Sievey / Frank Sidebottom Archive is the fact that you really get inside Chris and Frank’s head through the material.

“It might not always make sense, and it might blow your mind, but you’re there, right in Chris’s imagination and in the centre of his creativity. And of all the documents and objects, Frank’s head is the [paper mache] crown jewel.

“So the fact we can now even get inside that… well, that’s absolutely fantastic. Archivists love to create order but Chris Sievey can’t be categorised – he’s a 20th century pop culture polymath. There’s chaos and precision, ordinary and extraordinary, and all manner of creation and art – it’s like looking through a kaleidoscope at the sunset over Timperley.”

In 2019, an exhibition held at Archives+ in partnership with David J Arnold and Steve Sullivan explored the mind of Chris and Frank. With the encyclopaedic knowledge of David and Steve, the exhibition demonstrated the range and depth of the material. From the head and puppet bodies, to Chris’ school report and Amoeba Frank, so many aspects of Chris / Frank’s prolific work were available for people to see.

Head of Frank Sidebottom
by Department of Archaeology, Classics and Egyptology
on Sketchfab

And it wasn’t just Frank fans who visited, visitors from across the country of all ages visited and learned about the creative genius of Chris. The digitisation of Frank’s head continues this mission to share the story of this fascinating entertainer and artist.

Photogrammetry is the creation of 3D, digital models from 2D photographs. Frank’s head presented various challenges to the team; the eyes are made out of a pair of tights, the surface of the head is a little lumpy (Chris Sievey repaired the head using a cigarette packet at one time!) and the inside is cushioned with old kitchen sponges. These kitchen sponges help hold the head in place, but they make the head confined and hot to wear.

Added to this, Frank Sidebottom was hugely animated and performing the character was such hard work that Chris drilled holes in it to allow further ventilation. This had the unfortunate result of visible steam coming from the top of the head during performances! Chris filled in the holes because, although hilarious, the steam from the top of his head was not an intended part of the comedy and was a distraction from the true material of the show. The holes are still visible from the inside of the head, an important part of the head’s story, but recording them with photogrammetry presents a real challenge (one that is still in progress and not visible in the current model).

Needless to say, the head would be somewhat sweaty after performing and in need of a good wash, so Chris would stick the head in the bathtub. All of these factors are part of the object’s story and integral to the preservation of the history of the object. As a result, the photogrammetry recording of the object required careful photography and was a challenging reconstruction to try to capture as detailed features of the head as possible; the Photogrammetry Team was more than happy to meet the challenge and we hope you like the model we built.

As we move into an increasingly digital world, archiving and conservation are rapidly changing. Physical objects are at risk from pests, disaster, and deterioration. The fires at the Notre-Dame cathedral and Rio de Janeiro’s National Museum, for example, highlight the importance of digital preservation. In creating a digital recreation, objects and their stories can live and exist beyond their physical lifespan, allowing future generations to learn from and digitally examine them, which is particularly important under our current levels of coronavirus isolation and an increase in distance learning. 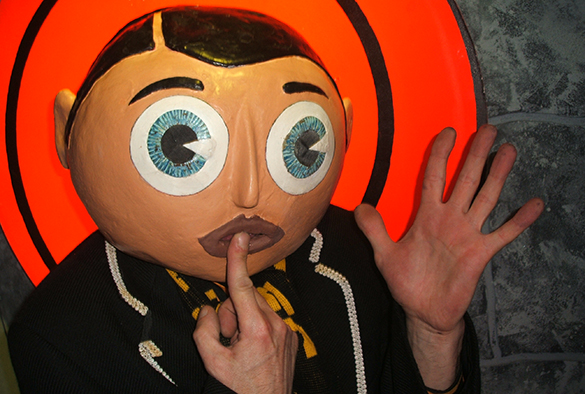 The advantages of 3D recording over 2D are numerous, 3D models allow for people to ‘handle’ and inspect the objects in 360° without any risk to the original object, and provide a near unparalleled ability to capture fine detail if done carefully with consideration for the object and features.

The process of photogrammetry also removes any artefacts of lighting (shadows, for example, are not recreated) and allows for examination of shape, in some cases revealing relief patterns that might not be easily seen when the true colours are present. For museums and archives in particular, it’s a cost-effective and accessible way for virtual visitors to engage with and learn about the objects and their history.

In preserving Frank’s head in this way, we preserve part of his story and legacy, we capture details of the head and bring them back to life in a way that might otherwise be hard to identify from photographs.