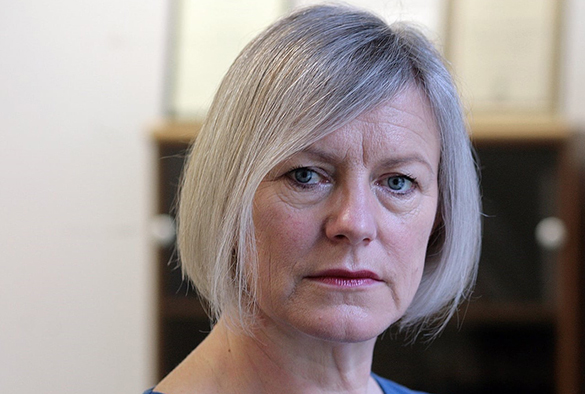 The University of Liverpool is delighted to announce the appointment of UK Independent Anti-Slavery Commissioner, Dame Sara Thornton to the post of Honorary Professor in Modern Slavery.

Dame Sara Thornton said: “I am delighted to have been appointed Honorary Professor in Modern Slavery at the University of Liverpool.

“As the Independent Anti-Slavery Commissioner, I have been encouraged by the passion, rigour and critical insight demonstrated by the research community as they seek to better understand – and therefore tackle – contemporary slavery.

“I am committed to building bridges between research, policy and practice and welcome this   exciting opportunity to work more closely with academics and experts at the University of Liverpool.”

After joining the Metropolitan Police in 1986, Dame Sara served in a number of different roles across a 33-year career, culminating in the post of Chief Constable of Thames Valley Police from 2007 until 2014 – when she became Chair of the National Police Chiefs’ Council (NPCC).

Welcoming Dame Sara Thornton’s appointment, CSIS Co-Director Dr Laura Sandy, said: “The University is very conscious of the legacy of the slave trade, which has shaped the institution and the city, and of the continuing global problem of contemporary slavery and trafficking.

“I’m thrilled to be working with Dame Sara and for the opportunity for the Centre to not merely   research slavery, but to help fight all of its modern manifestations.”

Dr Richard Benjamin, Head of the International Slavery Museum on Liverpool’s waterfront, said: “National Museums Liverpool’s partnership with the CSIS is of great importance to us as a museums service.

“Together, we share a responsibility for responding to and educating people in the painful subject of slavery in a historical sense, but also in raising awareness of contemporary slavery as we partner in our campaigning for human rights and equality.

“We are at a crucial moment and we look forward to working closely with Dame Thornton in her new role to ensure our shared experience in this area has a valuable impact in highlighting the plight of those who have suffered and continue to suffer at the hands of slavery and human trafficking.”

Established in 2006, CSIS promotes an international, comparative, and interdisciplinary approach to examine the cultural and social effects of the slave trade, slavery, and resistance, on all societies involved, past and present. It also furthers the study of memorialisation, and of the interpretation of slavery as part of a wider public history agenda. It is also at the forefront of research on the political and legal questions surrounding novel forms of labour exploitation.

Dr Laura Sandy, an expert in historical slavery, added: “This appointment could not be more timely, as people across the globe unite against racism and demand equality for all human beings.

“Together, we are determined to both recognise and redress past injustices and actively contribute to a better future for all.”

The UK Anti-Slavery Commissioner has a nationwide remit to encourage good practice in the prevention, detection, investigation and prosecution of slavery and human trafficking offences and the identification of victims.