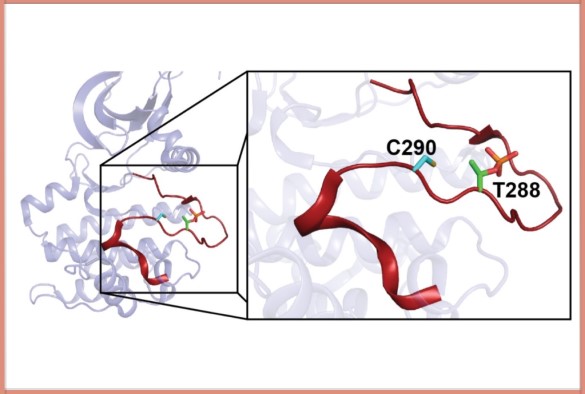 Scientists working together at the University of Liverpool and the University of Georgia have revealed important new insights into how a class of enzymes called kinases are regulated. The research is published today in the journal Science Signaling.

Oxygen is continually required to fuel human life. However, cells are also exposed to reactive chemicals derived from oxygen, called reactive oxygen species (ROS). So-called ‘oxidative stress’ is associated with ageing, and can damage cells leading to diseases and death. On the other hand, ROS are also used by living systems at lower concentrations as an ‘on/off’ switch, rather like red/green traffic lights, to help order the flow of communication in cells.

In the two new studies, researchers have focused on understanding how ROS reversibly control the activity of two ancient families of enzymes called kinases, which add phosphate groups to biomolecules at a reactive sulfur-containing amino acids called cysteine, in order to control how they work as enzymes.

Using multiple scientific strategies, including X-ray crystallography, mass spectrometry and real-time enzyme analysis, the researchers found that many more kinases than previously thought are reversibly controlled by the amount of ROS that they are exposed to. The work has implications for understanding both basic and disease biology, since kinases are used as biomarkers and drug targets in many inflammatory and proliferative diseases, including cancer.

The study was carried out by Dr Dominic Byrne in the laboratory of Professor Patrick Eyers in the Department of Biochemistry and Systems Biology at the University of Liverpool in collaboration with Dr Safal Shrestha, Dr Natarajan Kannan and colleagues at the University of Georgia.

Professor Patrick Eyers explained: “This work further opens up the study of the regulation of the hundreds of diverse kinases found in cells, and makes us think differently about how these types of ‘redox’ messages are sensed and relayed in living systems.”

Image: The protein kinase Aurora A, showing the position of the ‘redox-active’ cysteine (C290), next to a phosphorylated threonine (T288)