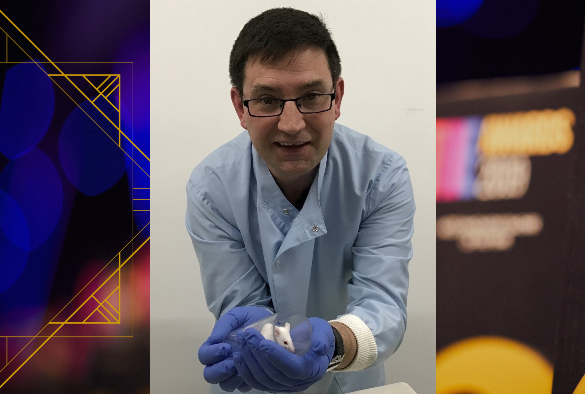 John Waters, Chief Animal Technician at the University of Liverpool, has been shortlisted in the Outstanding Technician of the Year category in this year’s Times Higher Education Awards.

John has been nominated for the enormous commitment he has made to improving the lives of laboratory rodents required for biomedical research, and for providing substantial support to fellow animal technicians across the UK and beyond.

Over a thirty-year career at the university, John has risen from trainee to Chief Animal Technician and Named Animal Care and Welfare Officer (NACWO). He leads the animal care team in the unique world-class behavioural facility at the Henry Wellcome Laboratory of Mammalian Behaviour and Evolution, supporting research on rodent behaviour and laboratory animal welfare.

Since 2010 John has been heavily involved in promoting the implementation of alternative, less stressful, mouse-handling techniques in research laboratories.

Professor Jane Hurst, Head of the Mammalian Behaviour and Evolution group, said: “The non-aversive handling methods that my team have developed have substantial benefits for laboratory animal welfare and for improving scientific results, but will only have impact if taken up by those that care for and use laboratory mice worldwide.

“John’s practical insight and support for other care providers has been key to widespread uptake of the refined handling methods nationally and internationally, promoting a culture of care for both animals and their handlers. There can be no better role model than John to inspire other technicians in how they can take the initiative and really make a difference.”

John is a member of the Institute of Animal Technology (IAT) Council and in 2017 received the IAT’s Andrew Blake Tribute Award in recognition of his work. He was also the UK recipient of the AAALAC International Fellowship in 2019.

On receiving his nomination, John said: “I’m delighted to be shortlisted for this prestigious award alongside nine other talented and dedicated technicians. To improve the daily lives of animals used in research is the reason why I am an animal technician and I am grateful to Professor Hurst for giving me the opportunity to follow my passion to ‘make a difference’ in this field.

“I hope that this nomination will inspire technicians across the University to get involved in research projects as they have a lot to offer, and it is very gratifying to know that technicians can make a difference.”

Winners of the 16th annual Times Higher Education Awards will be announced in a virtual ceremony on 26 November.