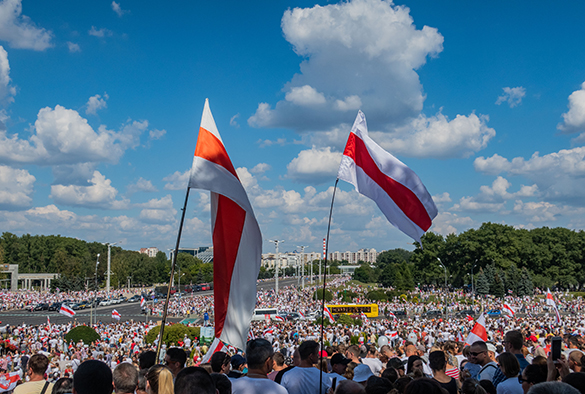 After an urgent debate initiated by the European Union, the UN Human Rights Council has condemned human rights violations in Belarus following the country’s disputed election in August. On September 18, the council passed a resolution instructing the UN High Commissioner for Human Rights to enhance its scrutiny of the situation in Belarus.

But international organisations have been depressingly slow to react to the events in Belarus – demonstrating the inherent problems with the effectiveness of the international human rights regime.

Almost every known human right of Belarusians has reportedly been violated by authorities in recent weeks. The key opposition candidates standing against the president, Alexander Lukashenko, were arrested before the poll – and remain in prison. The counting of the ballots themselves was not transparent, according to observers, and after the results were announced, massive peaceful protests were interrupted by brutal violence from state police. Lukashenko’s principle remaining opponent, Svetlana Tikhanovskaya, fled into exile in Lithuania with her children.

People have reportedly been killed, tortured, raped, arbitrarily detained, and their privacy and freedom of expression violated. The internet was blocked in Belarus for several days, and journalists arrested.

There are very few examples of human rights violations of this scale happening in Europe since the collapse of the Iron Curtain. But the reaction of international and European human rights institutions has not been proportionate to the magnitude of the crisis.

There are two key reasons which hinder international action after human rights violations. First, authorities which violate human rights need to agree to be supervised by international bodies and invite observers into their country. This rarely happens during human right crises – and even if an organisation is already in the country it can be removed fairly easily.

In 2010, after the Organization for Security and Co-operation in Europe (OSCE) criticised the results of a previous Belarusian election, its office in the country was shut down. In mid-September, more than a month after the recent election, the OSCE established an expert mission to look into the situation with human rights in Belarus. But it’s unlikely that the Belarusian authorities will collaborate.

Second, political realities mean consensus is difficult. The most brutal human rights violations can be prevented by force by the UN Security Council but its five permanent members – Russia, China, France, the US and the UK – must agree on the course of actions. In the case of Belarus, this is practically impossible. The Russian and Chinese authorities are regarded as allies of Lukashenko and they would almost inevitably block any immediate actions to protect human rights in Belarus. The situation in Belarus was discussed in the UN security council in late August, but no identifiable actions were taken.

The UN secretary-general, Antonio Guterres, and other UN officials, including the UN special rapporteur on Belarus, Anaïs Marin, have expressed their concerns about the situation. But Marin is not currently allowed into Belarus.

Belarus is a European country and, while it is not an EU member, the EU has a legitimate interest in what is happening in the country, which borders EU members Poland, Lithuania and Latvia.

But what of the Council of Europe, the organisation created to promote human rights, democracy and the rule of law? Even though Belarus is not a member, collaboration between Belarus and the council has intensified over the past decade, and the council operates an information point in the country. The reaction of the council’s secretary-general, Marija Pejčinović Burić, to the unrest was initially muted, although in mid-September she did issue a statement that mass intimidation of citizens was “totally unacceptable and must stop”. On September 21, the council’s commissioner for human rights, Dunja Mijatović, also issued a statement condemning the human rights violations, and said there could be “no peace without justice and proper respect for human rights”.

Meanwhile, the parliamentary assembly of the Council of Europe, which consists of members from all its 47 member states, was more proactive. It plans to discuss a motion to create an investigatory body on the ill-treatment of Belarusian citizens at its next session. If this motion is approved, although it won’t have an immediate impact on the situation, it will send a clear message that those who violate human rights will be identified. The assembly should coordinate its efforts with the OSCE, as joint actions might be more effective.

There are many more actions that international organisations could initiate to support human rights in Belarus. These could include an international tribunal capable of investigating torture, multiple personalised sanctions or investigations of businesses that collaborate and sell military and police equipment to the Belarusian regime. Political will, and a genuine belief in human rights, is necessary for this to become a reality.