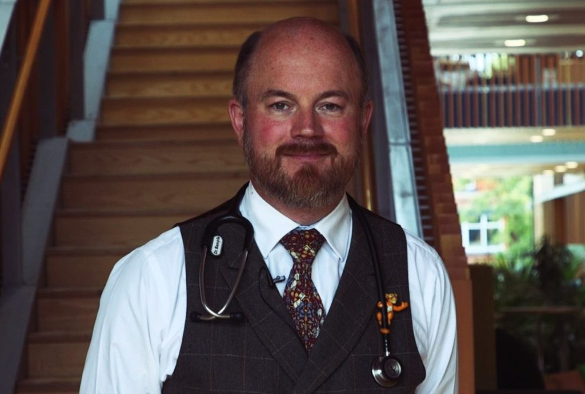 The University of Liverpool’s Professor Calum Semple has been recognised with an OBE in the Queen’s Birthday Honours for his services to the COVID-19 response.

As a member of the Scientific Advisory Group for Emergencies (SAGE), Professor Semple has played a key role in advising the UK Government on COVID-19. He also leads a major national COVID-19 research study and has appeared regularly as an expert in the media throughout the pandemic.

Professor Semple joined Liverpool in 1999 after completing his clinical training in London and Oxford. He holds the position of Professor of Child Health and Outbreak Medicine at the University and is a consultant respiratory paediatrician at Alder Hey Children’s Hospital.

Having dedicated most of his career to studying disease outbreaks, including HIV, MERS and Ebola, he has been a leading expert during the COVID-19 crisis.

As the Chief Investigator of the International Severe Acute Respiratory and Emerging Infection Consortium (ISARIC) Clinical Characterisation Protocol UK (CCP-UK), Professor Semple and his colleagues have collected, distributed and analysed thousands of COVID-19 specimens over the past nine months. The results have helped inform the outbreak response and patient care, not just in the UK but internationally, and will continue to do so.

Professor Semple said: “I am delighted to be honoured by this award and wish to express my profound gratitude for the support of my clinical research colleagues. They include dedicated research nurses, volunteer medical students and my collaborators at our great hospitals and universities.

“It is sobering to reflect on the impact of HIV, Ebola and now COVID-19 on people’s health, societal wellbeing and the economies of affected countries. This has driven my work with the International Severe Acute Respiratory and emerging Infection Consortium (ISARIC) to prevent illness and death from infectious disease outbreaks. This award suggests we have succeeded in some measure.”

Professor Dame Janet Beer, University of Liverpool Vice-Chancellor, said: “Everyone in the University of Liverpool community applauds the award of an OBE to Professor Calum Semple. His work as a member of SAGE throughout the COVID-19 emergency has brought him to the attention of the entire nation and we all have many reasons to be hugely grateful to him for his work both as a scientist and an outstanding communicator of that science to a wider public. We are proud that he has been so honoured.”

In 2016 Professor Semple and his team were awarded the Queen’s Ebola Medal for Service in West Africa, and in 2019 a Commonwealth Association Award for their work with Ebola survivors.

This year’s Queen’s Birthday Honours list recognises doctors, nurses, fundraisers and volunteers who have made outstanding contributions to the UK’s coronavirus response. The list, which was due to be published in June, was postponed in order to consider nominations for people playing crucial roles during the first months of the COVID-19 effort.