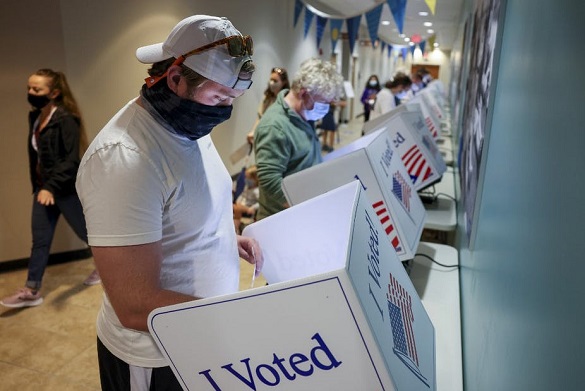 Rida Laraki is an Honorary Professor in the University’s Department of Computer Science and Director of Research as the Université Paris Dauphine – PSL.   This article was first published by `The Conversation’.

A wide range of US election polls are leaning solidly toward a Joe Biden victory. But Donald Trump and his supporters claim to be certain of his victory on November 3, and it’s not without historical precedent. In 2016, the polls favored Hillary Clinton and on election night she garnered 3 million more votes than Trump. But she didn’t make it to the White House because of the Electoral College, or so the argument goes. In fact, the real problem is elsewhere.

The US Electoral College gives each state the same number of electors as the state has members of Congress. With the exception of voters in Nebraska and Maine, Americans choose their president using majority voting (also called plurality voting): voters mark a box next to the name of a candidate, and the candidate with the greatest number of boxes marked wins all the state’s electoral votes, regardless the margin of their victory.

Candidates therefore have an interest in focusing their resources on the swing states. This strategy paid off for Donald Trump in 2016 when he won Florida with a 1.3% margin over Hilary Clinton, Michigan with 0.3%, Wisconsin with 0.8%, and Pennsylvania with 1.1%. If Clinton had won these states, she would have been elected president with 307 electoral votes, against 231 for Trump.

The problem with majority voting – an apparently democratic system – is that a fringe candidate with no chance of being elected can determine by their presence or absence the winner of the election. This is called the “Arrow paradox”.

In 2020 it’s predicted that libertarian Jo Jorgensen will get between 2% and 3% in these swing states, and the green Howie Hawkins 1% to 2%. And then there’s rapper Kanye West, who told Fox News on August 6 that he was running for president to “siphon” the black vote from Joe Biden, and who is on the ballot in 12 states that represent 84 votes of the electoral college.

What to do? Use majority judgment

Majority judgment is a new voting system that was specifically designed to avoid the pitfalls of traditional voting systems, and in particular the Arrow paradox.

In this method voters are asked to express their opinions much more precisely than by choosing a single candidate. The ballot charges the voter with a solemn but simple task: “To be president of the United States, having taken all the elements into account, I judge that this candidate would be: _Great, Good, Average, Poor, Terrible”. Let’s see how the system works.

It just so happens that a similar question – “What kind of president do you think each of the following would be – a great, good, average, poor or terrible president?” was asked by Pew Research Center in March 2016. According to the results, we can then rank Democratic and Republican primary candidates.

Calculating the majority judgment ranking of the candidates is straightforward. Start at each end of the rating scale and add up the percentages until a majority of opinions are reached. Take the example of John Kasich: 5% think it would be “Great”, 5 + 28 = 33% think it would be “good” or better, and 33 + 39 = 72% (i.e. the majority) think that he would be “average” or even better. So Kasich’s majority grade is “average”.

The tiebreaker between candidates with the same majority grade is determined by the size of the blocks for or against their majority grade. Thus, the candidates who come out on top are Kasich and Sanders. Clinton and Trump come in last, and yet they were the ones nominated by their party.

In a Pew Research Center poll from June 2020, people assessed the two presidential candidates in the following way:

It is time to change the way we vote

More than 20% of the voters dislike both Trump and Biden, believing that neither of them would make a good president. However, with majority voting, they will be forced to choose one of the two. As a result, some will abstain, some will vote for a fringe candidate, while others will decide at the last minute. What this means is that the outcome of the election will, arguably, be a random variable that is determined by the latest news story (that might be made up) or news, or the Supreme Court.

With majority judgment, on the other hand, voters could give their opinion on the main candidates as well as the fringe candidates and do so accurately. If a voter thinks one of the two main candidates is “poor” and the other “terrible”, they can express that a difference on the ballot. But with majority voting, this voter’s views will be ignored.