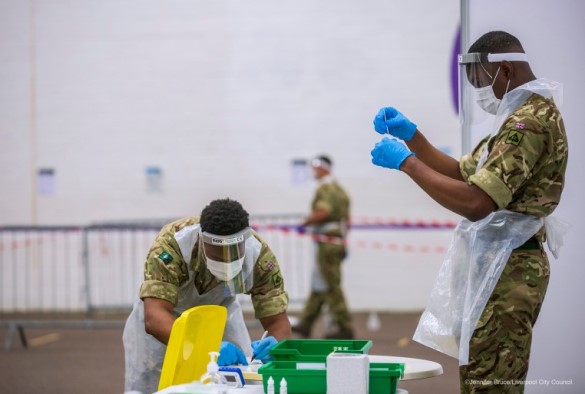 One of the mass Covid-19 testing centres at the Liverpool Tennis Centre on 8 November 2020. Picture: Jennifer Bruce/Liverpool City Council.

The launch of Liverpool’s COVID-19 mass asymptomatic serial testing pilot on November 6 has generated a huge amount of national and international interest.

Since then until yesterday, 140,000 Liverpool city residents have had a lateral flow test or PCR test. That’s over 1 in 4 of our population.

Over 570 of our citizens tested positive for the virus through the lateral flow test, despite showing no symptoms.

These are 570 people who could otherwise have unknowingly gone on to infect at least another 570 people, and potentially more, and so on.

In the past seven days, 24% of positive cases in the city have been identified via this test.

The city agreed to work with central Government on this pilot programme to achieve these immediate impacts whilst also paving the way for safely releasing people sooner from unnecessary quarantine, which also damages public health and the economy.

This is a pilot. There is no blueprint to follow. The guidebook is being written as we progress. Mistakes will be made. And the learning will be made at a local and national level.

But the risk of doing nothing is not worth contemplating.

Our hospitals’ intensive care beds have been almost full since late September.
NHS staff have been at breaking point.

More than 20,000 people work in our hospitals. Frequent testing allows them to get into work to look after our friends and family.

Our £3bn a year tourism and hospitality economy, employing almost 40,000 people, is crumbling. Covid-19 has put that sector on pause – and raised the spectre of a deeply damaging decade to come.

Saving lives – and saving livelihoods – is the challenge, and a safe, sustainable, speedy release from national lockdown and further relaxation of local restrictions is the goal.

Our message is simple. Get tested. And get tested again.

This is you the people of Liverpool looking after yourself and each other, as one.
Thank you for doing so.