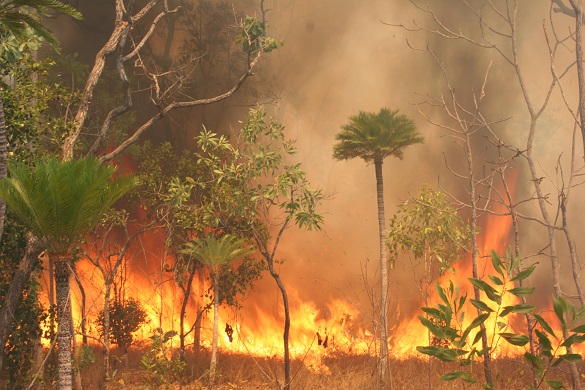 Changes in fire activity are putting at risk more than 4,400 species across the globe according to a new study by an international team of researchers including the University of Liverpool.

Lead author of the research, Dr Luke Kelly from the University of Melbourne, said: “Those species include 19 per cent of birds, 16 per cent of mammals, 17 per cent of dragonflies and 19 per cent of legumes that are classified as critically endangered, endangered or vulnerable, That’s a massive number of plants and animals facing threats associated with fire.”

The paper, Fire and biodiversity in the Anthropocene, published in Science, found that the species categorized as threatened by an increase in fire frequency or intensity, include the orangutan in Indonesia and mallee emu-wren in Australia.

Dr Kelly added: “Recent fires have burned ecosystems where wildfire has historically been rare or absent, from the tropical forests of Queensland, Southeast Asia and South America to the tundra of the Arctic Circle. Very large and severe fires have also been observed in areas with a long history of recurrent fire, and this is consistent with observations of longer fire seasons and predictions of increased wildfire activity in the forests and shrub lands of Australia, southern Europe and the western United States.”

The research team also found a striking example from Australia: the total area burnt by bushfires in the eastern seaboard from August 2019 to March 2020, 12.6 million hectares, was unprecedented in scale.

However, some species and ecosystems are threatened when fire doesn’t occur. Frequent fires, for example, are an important part of African savanna ecosystems and less fire activity can lead to shrub encroachment, which can displace wild herbivores such as wildebeest that prefer open areas.

Understanding what’s causing changes in different places helps us to find effective solutions that benefit people and nature according to the research team.

Professor Kate Parr, from the University of Liverpool’s School of Environmental Sciences is on of the 27 authors, from a combined 25 institutions around the world , of the research paper which identifies three main groups of human drivers as transforming fire activity and its impacts of biodiversity: global climate change, land-use and biotic invasions. This means that people and governments around the world need to act and confront the diverse changes to the environment that are occurring.

Professor Parr said: “Our review is very timely given the extreme fires in the US and Australia over the last year. Human activities are changing the way our world works – altered fire regimes are threatening species across the globe with extinction. We urgently need to rethink approaches to managing landscapes and fire, and think creatively about novel solutions.

Dr Kelly added: “It really is time for new, bolder conservation initiatives,” . “Emerging actions include large-scale habitat restoration, reintroductions of mammals that reduce fuels, creation of low-flammability green spaces and letting bushfires burn under the right conditions. The role of people is really important: Indigenous fire stewardship will enhance biodiversity and human well-being in many regions of the world.”

The paper `Fire and biodiversity in the Anthropocene’ (doi: 10.1126/science.abb0355) is published in the journal Science.