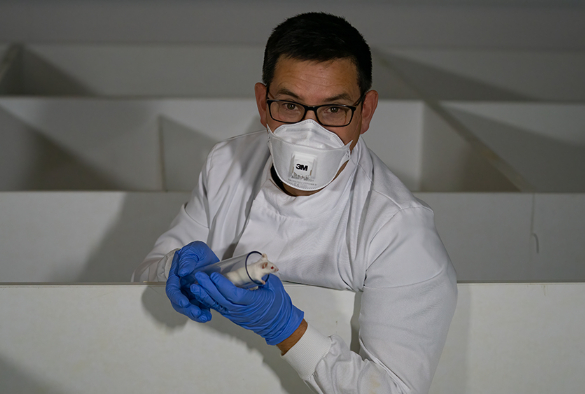 John Waters, Chief Animal Technician at the University of Liverpool, has been named Outstanding Technician of the Year at the 2020 Times Higher Education Awards.

The THE Awards – widely referred to as the ‘Oscars of higher education’ – are the biggest celebration in the UK HE calendar, attracting hundreds of entries from individuals, teams and institutions from all corners of the country. 2020’s ceremony was of course virtual, but still over a thousand people logged in to hear this year’s winners announced.

John was nominated for the enormous commitment he has made to improving the lives of laboratory rodents required for biomedical research, and for providing substantial support to fellow animal technicians across the UK and beyond.

As animal care and welfare officer, John is responsible for a variety of wild and laboratory rodents at the Henry Wellcome Laboratory of Mammalian Behaviour and Evolution. His expertise has been crucial in developing new methods for replacing the anxiety-inducing tail-handling method that was routinely used in labs across the world.

These more humane methods of animal handling are now being shared widely, in part thanks to workshops and training courses run by John in the UK and internationally. His care for fellow animal technicians is also well known – he has co-authored a number of training resources to help show other technicians how they can make a difference.

The judges described John as a “sterling example of an outstanding technician” and remarked that “the impact he has made throughout his career – locally, nationally and internationally – is undeniable.”

On winning the award, John said: “It was a surreal evening and I still can’t quite believe it! I’d like to thank Professor Jane Hurst and the Mammalian Behaviour and Evolution Group at Leahurst for giving me the opportunity to follow my passion to ‘make a difference’ in this field over the years. All the nominees and fellow technicians are winners in my eyes and we should all be very proud. It is gratifying to see technicians being recognised for the work that we do and I hope that my win will inspire others to realise that they can make a difference too.”

Professor Jane Hurst, Head of the Mammalian Behaviour and Evolution group, said: “I’m really thrilled that John has received this recognition for his dedication to help promote best practice in handling laboratory animals using the methods developed by our research team at Liverpool, and for the support he has provided to fellow animal technicians across the UK. I’m proud of the commitment he has shown towards improving the lives of laboratory animals and the people that look after them.”

Professor Louise Kenny, Executive Pro-Vice-Chancellor for the Faculty of Health and Life Sciences, added: “Congratulations to Outstanding Technician of the Year, THE award winner John Waters. His expertise has been recognised nationally with this award, and the University of Liverpool is very proud of John and this wonderful news.”

The winners of the 16th annual Times Higher Education Awards, which focused on activity during the 2018-19 academic year, were announced at a virtual ceremony on 26 November.