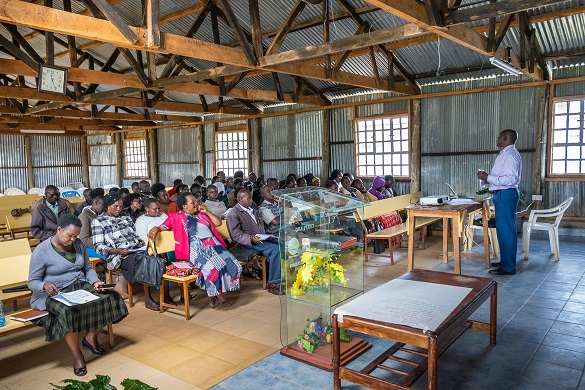 Researchers from the University of Liverpool’s Department of Public Health, Policy and Systems are spearheading a new community health workforce public health initiative for Kenya’s Ministry of Health.

The initiative sees implementation of a new University of Liverpool led training module in Household Air Pollution (HAP), health and prevention across the 47 counties of Kenya for 130,000 of Kenya’s community health workers (CHWs).

The team are part of the University’s NIHR CLEAN-Air(Africa) Global Health Research Group whose research has contributed to burden of disease assessments identifying household air pollution as the second largest environmental risk for health.

In 2019, HAP was responsible for 683,984 premature deaths and 7.5% of total disease burden, for the 850 million people in sub-Saharan Africa who rely on polluting solid fuel and kerosene for their household energy.

The International Energy Agency is expecting the number of households in sub-Saharan Africa using polluting solid fuels and kerosene to increase by 2030, due to population growth in the region, warranting the need for rapid action to prevent an increase in global disease burden related to HAP exposure.

To address this problem, CLEAN-Air(Africa) has been working closely with the World Health Organisation (WHO) and Ministries of Health in several countries of sub-Saharan Africa to provide evidence-based training in primary and secondary prevention of HAP-related disease for health professionals. The Kenyan initiative began in 2018 through discussions between the Ministry of Health’s Kenyan Directorate of Public Health and Professor Dan Pope, CLEAN-Air(Africa)’s Director.

Professor Pope said: “Each year more than 20,000 Kenyan’s die prematurely due to breathing in smoke from cooking and the Kenyan Ministry of Health had identified the issue of household air pollution as a public health priority.”

At the same time, his team were considering community health workers as a vital conduit for health promotion messaging around air pollution related disease prevention given their role as advocates for the communities they serve and their extensive population reach.

The team were tasked by the Ministry of Health to develop a new module for Household Air Pollution, Health and Prevention as part of a major revision to the Kenyan Community Health Worker training curriculum under the Kenyan Universal Health Coverage.

In November 2019, the new module was piloted by CLEAN-Air(Africa) with support from WHO for 300 community health workers across four of Kenya’s counties before being ratified by the Ministry of Health in March 2020.

Professor Pope added: “Unfortunately the COVID-19 pandemic led to a postponement of its rollout, but we are delighted to now be back on track with this first step of training the environmental and community health leads before national launch of the module across the country.”

Dr Salim Hussein, Head of Primary Health Care at Kenya’s Ministry of Health acknowledged the importance of the University of Liverpool’s role in the initiative saying “prevention of deaths and illness from household air pollution is a community health priority for the Ministry and we are very grateful to the University of Liverpool for steering development of the module, piloting and evaluating its implementation and training our ministry of health training leads in preparation for launch”.

The University of Liverpool, along with the WHO and other national and international partners are planning to adapt and deliver the new module across other sub-Saharan African countries through CLEAN-Air(Africa) to strengthen the role of health systems in preventing HAP-related disease.

The initiative has been reported in a blog by Nigel Bruce found at https://nigelgbruce.com/the-drive-for-clean-household-energy-in-africa-experience-from-the-front-line-in-kenya/