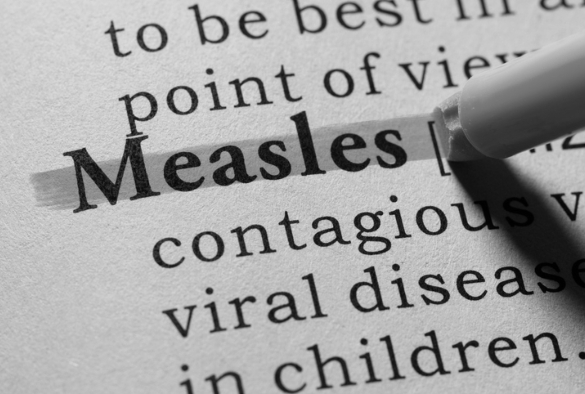 Professor Tom Solomon is Director of the National Institute for Health Research (NIHR) Health Protection Research Unit in Emerging and Zoonotic Infections at the University of Liverpool.

To Olivia, a new film on Sky Cinema, captures the year (1962) that author Roald Dahl’s daughter died of measles encephalitis. The death of seven-year-old Olivia nearly tore the family apart. This terrible story will be new to many people, but it’s not new to me. I first heard it 30 years ago from Dahl himself.

I was a junior doctor in Oxford and 74-year-old Dahl was my patient. He was hospitalised with a rare form of leukaemia, and every third night when I was on call, we would talk late into the night. As the weeks went on and it became clear he was not going to recover, he became more thoughtful about his own life.

He told me about Olivia one evening as I sat by his bed. She caught measles during an outbreak at her school. Initially, it was just a mild illness.

“We thought she was over the worst of it,” Dahl explained. “One saw, you know, the usual sort of thing, the fever, the tiredness, the spots. We even teased her for her polka dots.”

The next day she deteriorated.

Dahl had a wan smile and his eyes began to well up.

“I was sitting on her bed showing her how to fashion little animals out of coloured pipe cleaners,” Dahl later wrote, “and when it came to her turn to make one herself, I noticed that her fingers and her mind were not working together and she couldn’t do anything.”

Dahl asked Olivia if she was feeling all right.

“I feel all sleepy,” she said.

The doctors confirmed that the measles virus had entered Olivia’s brain to cause encephalitis (inflammation). Dahl was distraught and spent years trying to understand how it had happened. Of all those who had measles, why had she suffered such a terrible outcome?

“I wanted to study it, to set up a careful investigation,” he told me. “I was prepared to get in touch with every parent of every child in this country who had had severe complications from measles.”

At the time, I thought this sounded rather fanciful. He was, after all, a storyteller. And in our late-night chats he would often tell me barely believable tales, especially about medicine. He mentioned a neurosurgical device he had invented and his role in founding the Stroke Association. At times I wondered whether he was pulling my leg, or perhaps had become muddled with some of the drugs he was on. Years later, in researching my book Roald Dahl’s Marvellous Medicine, I discovered it was all true, and more.

After Olivia’s death, Dahl had indeed contacted scientists in Britain and the US to discuss measles and its complications. He corresponded with them for years, sharing his theories, while they shared their data. He even started planning a national study, but once measles vaccines became available, he figured the problem would largely be erased.

And he was right; cases of measles decreased dramatically. But Dahl was horrified to learn that some parents chose not to vaccinate their children. He campaigned on the issue, contacting ministers and health officials in the 1980s. He wrote a letter, which was widely distributed, telling the story of Olivia and imploring parents to vaccinate their children. It is still used today when there are measles outbreaks.

Dahl understood parents’ concerns about very rare serious side-effects of the vaccine, but he explained that the chances of this were about a million to one. “The probability of a child choking to death on a chocolate bar is probably greater,” he said.

Measles vaccine uptake increased for decades but was set back in the 1990s by the publication in The Lancet of a fraudulent research paper by Andrew Wakefield. This was jumped on by anti-vaxxers, who are passionately against immunisations, whatever the science says.

Were Dahl still alive today, he would have been fascinated by the rapid medical developments during the coronavirus pandemic, especially the vaccines. I suspect he would also be encouraged by their uptake.

Despite the understandable hesitancy of some over the new vaccines, and the malignant attempts of the anti-vaxxers, the vast majority of people are getting the vaccine as soon as they can. Unlike measles, where most people now rarely see a case, with COVID-19 the risks are up close and personal, and for most people, the benefits of vaccination are immediately obvious.