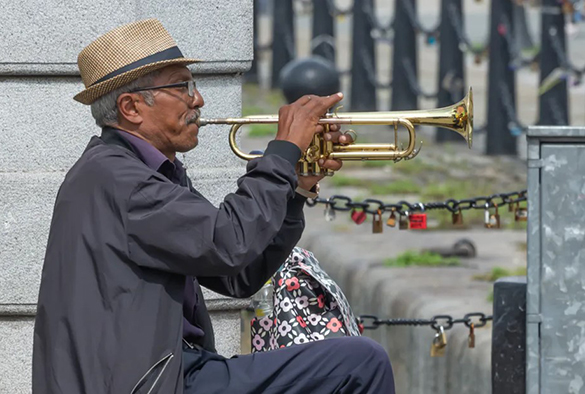 As vaccination programmes allow for the gradual lifting of social restrictions, the revival of the live music industry is low on the list of priorities. This is perhaps understandable when you think of the risks associated with a small music venue crammed with people dancing and singing along to a band.

But the delay could be disastrous for both the economic and cultural value that live music brings. In the UK, nearly half of all Musicians’ Union members are reportedly ineligible for any of the government’s financial support schemes, and it is estimated that as many as 50% of the UK’s clubs will not reopen.

As things stand, small and medium sized venues (and the musicians themselves) will continue to hurt even as other small businesses like restaurants and shops welcome back customers. Yet there could be a safe way for musicians and venue operators to get back in business sooner.

For if we think about the space in which a group of people gather to appreciate live music, it doesn’t have to be in a sweaty windowless cellar.

Indeed, throughout the pandemic, musicians have embraced online events which at least found them a virtual live audience. And in the summer of 2020, when some restaurants and pubs reopened using outside spaces, informal live performances swiftly followed, as musicians took to busking in the streets.

So with a proactive local government approach, and a re-imagining of our urban public space, live music with audiences might be able to return much sooner than fans – and governments – think.

The key to this possibility is innovative use of city streets, squares and parks. My research examines live music venues and investigates how musical performances can be a core feature in defining the urban identity of cities. They can have a marked effect on planning policy, the way public space is used, and even influence large scale urban design projects.

Party in the park

Liverpool, well known around the world for its Merseybeat heritage, still has a vibrant grassroots music scene. The city also has an exemplary track record of opening up urban spaces for live music performance. In the summer of 2020, it was amongst the first places in the UK to close off central streets to traffic, encouraging the growth of new outdoor eateries which in turn provided sedentary audiences for buskers.

Before the pandemic, the annual Liverpool International Music Festival (successor to the Matthew Street Festival, once the largest free music event in Europe) took place in the city’s largest park with multiple stages and a huge audience.

And each year Sound City takes over dozens of redundant buildings and sites, city squares and streets, as well as clubs and bars for three days of industry workshops and artist performances. In 2020, both festivals substituted live virtual events for their usual format. Sound City have recently announced the event will take place in October 2021, in the hope that legal restrictions on social contact will have been removed.

A dedicated council office coordinates these festivals (and others) by organising public transport, rubbish collection and security, easing the whole process for the music promoters.

In the coming months, with sponsorship from local and national government, a similar approach could see small scale music events take place across the country. With far less organisation and investment required, a temporary outdoor club for 100 people is a lot easier and cheaper to organise than a major festival.

Temporary and mobile stage design is a well practised skill in the music industry, so providing staging, amplification and lighting would not be a problem, and provide welcome employment. The new issue, as in so many other sectors, is how to safely organise the audience.

To address this, one project has invited designers from around the world to investigate how city spaces might be reorganised to provide visual systems that enable social distancing.

Potential solutions include ground marking, seating, and sculptures that encourage people to occupy public space in a safe way. Interventions might include selecting areas in parks and other public spaces for performers and audiences with new temporary facilities and bespoke staging, accessed with contact free ticketing.

These instant outdoor venues could be hired by venue organisers while their own space cannot be used, or by groups of collaborating musicians. Then, by the time shops, takeaways and pubs reopen, city squares, streets, and parks could become safe spaces for live music.

This would be of great value to music fans, and a vital boost for events organisers, musicians, and security, stage and equipment suppliers, who would all have income generating work. With the online and unofficial live events that have continued during lockdown, performers and audiences have shown that there is a social and cultural need for these events to take place.

The economic need is even more important, if we are to sustain a vibrant UK live music industry which employs hundreds of thousands of people and generates over £1 billion every year.