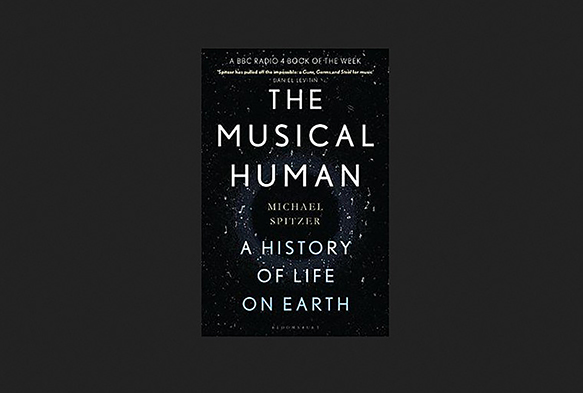 Michael Spitzer is Professor of Music in the University of Liverpool’s Department of Music. His new book, The Musical Human is this week’s Radio 4 Book of the Week.

I’m sitting in my kitchen at Liverpool playing with my favourite phone app, Radio Garden, and it is a thing of beauty. Invented in 2016, it’s really only taken off under lockdown. When you open it, you see a globe spinning through space, like on Google Earth. You turn the globe with your finger to any continent you like, zoom in by pinching the screen until a country or a city takes your fancy, and tune into one of 30,000 radio stations. There’s nothing like music to transport you, instantly, to a far-away culture. Radio Garden’s sonic tourism is a fix for travel-hungry people marooned by Covid-19. But something deeper is going on because, to take the long historical view – as well as the view from space – our ability to encircle the planet through music brings music’s evolutionary story to its climax. Music’s journey to world domination began literally with the first step; when ‘Ardi’ the australopithecine, humans’ oldest known ancestor, got up on her hind legs 4.4 million years ago, and walked. Why? Because ‘bipedalism’, walking upright on two feet, forged vital neuronal links between brain, body, and sound, and stamped hominin music with its characteristic walking rhythms. It forever associated music with motion and travel. This is why human music ‘dances’ and ‘walks’, and why it feels so natural that music today soundtracks our lives via our iPhones and earbuds as we saunter or jog through cities. The journey from australopithecines to soundtracks is traced in my new book, The Musical Human.

Pooling together evidence from archaeology, anthropology, biology, and the psychology of hearing, I make the bold case that music drove human evolution: that music was the most important thing we ever did. After ‘Ardi’ and her more famous descendant ‘Lucy’ (3.2 million years BC) starting walking, 1.5 million years ago rhythmic patterns helped Homo ergaster knap flint tools; rhythm coordinated communal labour. 500,000 years ago, Box Grove in Sussex was the site of celebratory ritual dances, as music brought Homo heidelbergensis together into a community. 250,000 years ago, Neanderthals perfected a sing-songy, musical kind of communication. 40,000 years ago, sapiens crafted the first musical instrument out of vulture bones, as part of humans’ cognitive revolution. The skill to make bone flutes coincided with sapiens’ ability to paint figural representations on cave walls, carve figurines, such as the famous Lion-man sculpture discovered in the Hohlenstein-Stadel Cave in Germany, and, presumably, the acquisition of language and conceptualreason. Yet at every stage of human evolution, music was there before language or reason.

Does that mean that music stopped evolving once sapiens achieved behavioural maturity 40,000 years BC? No, because what happened next lifted music’s journey to a more abstract level. By detaching notes from the human voice, musical instruments allowed us to imagine music itself as a kind of motion, with one note ‘walking’ to another. We love to talk of music in terms of motion through space, but it is really just a metaphor because there is nothing to see except vibrating air. So why do we do it? There is a neurological basis for why sounds in general evoke movement. Our sense of hearing is closely linked to our vestibular system, which is responsible for keeping our balance when we are walking. Listening to music activates the premotor cortex, basal ganglia, and cerebellum, motor areas associated with movement. Indeed, people need only to imagine music – not necessarily to actually hear it – for these brain regions to be activated. Amazingly, it all goes back to fish. If you uncoiled the organ of Corti in the human cochlea, it would resemble the fish’s lateral line, through which it detects the swimming movements of other fish. Fish don’t hear very well. But they are excellent at detecting motion through water. The biological link between hearing and motion was forged in the sea. On dry land, what hominins and sapiens added to the mix was the rhythm of walking on two feet.

Of course, flutes, like all small instruments, are easily portable, so music started moving in a literal sense too. The global history of music is really a story of musical travels. The vaunted Silk Road was a musical super-highway for melodies, scales and modes, instruments and performance techniques. Caravans laden with silk, cotton, gunpowder and spice might also have carried lutes. And lutes changed their names everywhere they went: pandoura (ancient Greece), veena and then sitar (India), pipa (China), pip’a (Korea), biwa (Japan), barbat (Persia), oud (Middle East), and the modern guitar. Paul McCartney’s first guitar, a Zenith, was shipped from Germany. And when Silk Roads took to the sea, ‘Cunard Yanks’, the waiters and catering staff on the Cunard shipping line between Liverpool and New York, carried home rock n roll, rhythm n blues, country n western, and the music of Motown and the girl groups to a very receptive John Lennon. The rest, as they say, is history.