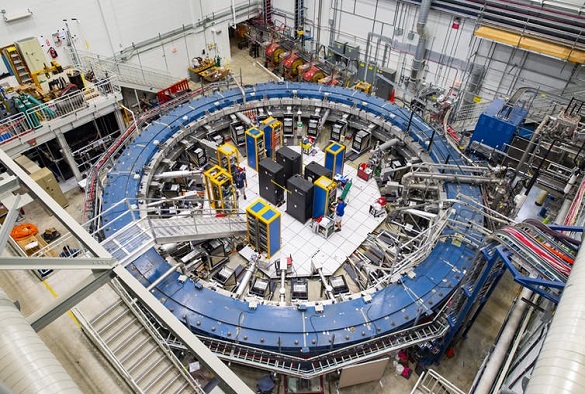 The muon experiment at Fermilab

Seven years ago, a huge magnet was transported over 3,200 miles (5,150km) across land and sea, in the hope of studying a subatomic particle called a muon.

Muons are closely related to electrons, which orbit every atom and form the building blocks of matter. The electron and muon both have properties precisely predicted by our current best scientific theory describing the subatomic, quantum world, the standard model of particle physics.

A whole generation of scientists have dedicated themselves to measuring these properties in exquisite detail. In 2001, an experiment hinted that one property of the muon was not exactly as the standard model predicted, but new studies were needed to confirm. Physicists moved part of the experiment to a new accelerator, at Fermilab, and started taking more data.

A new measurement has now confirmed the initial result. This means new particles or forces may exist that aren’t accounted for in the standard model. If this is the case, the laws of physics will have to be revised and no one knows where that may lead.

This latest result comes from an international collaboration, of which we are both a part. Our team has been using particle accelerators to measure a property called the magnetic moment of the muon.

Each muon behaves like a tiny bar magnet when exposed to a magnetic field, an effect called the magnetic moment. Muons also have an intrinsic property called “spin”, and the relation between the spin and the magnetic moment of the muon is known as the g-factor. The “g” of the electron and muon is predicted to be two, so g minus two (g-2) should be measured to be zero. This is what’s we’re testing at Fermilab.

For these tests, scientists have used accelerators, the same kind of technology Cern uses at the LHC. The Fermilab accelerator produces muons in very large quantities and measures, very precisely, how they interact with a magnetic field.


The muon’s behaviour is influenced by “virtual particles” that pop in and out of existence from the vacuum. These exist fleetingly, but for long enough to affect how the muon interacts with the magnetic field and change the measured magnetic moment, albeit by a tiny amount.

The possibility of new particles existing is not idle speculation. Such particles might help in explaining several of the big problems in physics. Why, for example, does the universe have so much dark matter – causing the galaxies to rotate faster than we’d expect – and why has nearly all the anti-matter created in the Big Bang disappeared?

The problem to date has been that nobody has seen any of these proposed new particles. It was hoped the LHC at Cern would produce them in collisions between high energy protons, but they’ve not yet been observed.

The new measurement used the same technique as an experiment at “Brookhaven National Laboratory in New York, at the beginning of the century, which itself followed a series of measurements at Cern.

The Brookhaven experiment measured a discrepancy with the standard model that had a one in 5,000 chance of being a statistical fluke. This is approximately the same probability as throwing a coin 12 times in a row, all heads up.

This was tantalising, but way below the threshold for discovery, which is generally required to be better than one in 1.7 million – or 21 coin throws in a row. To determine whether new physics was in play, scientists would have to increase the sensitivity of the experiment by a factor of four.

To make the improved measurement, the magnet at the heart of the experiment had to be moved in 2013 3,200 miles from Long Island along sea and road, to Fermilab, outside Chicago, whose accelerators could produce a copious source of muons.

Once in place, a new experiment was built around the magnet with state of the art detectors and equipment. The muon g-2 experiment began taking data in 2017, with a collaboration of veterans from the Brookhaven experiment and a new generation of physicists.

The new results, from the first year of data at Fermilab, are in line with the measurement from the Brookhaven experiment. Combining results reinforces the case for a disagreement between experimental measurement and the standard model. The chances now lie at about one in 40,000 of the discrepancy being a fluke – still shy of the gold standard discovery threshold.

Intriguingly, a recent observation by the LHCb experiment at Cern also found possible deviations from the standard model. What’s exciting is that this also refers to the properties of muons. This time it’s a difference in how muons and electrons are produced from heavier particles. The two rates are expected to be the same in the standard model, but the experimental measurement found them to be different.

Taken together, the LHCb and Fermilab results strengthen the case that we’ve observed the first evidence of the standard model prediction failing, and that there are new particles or forces in nature out there to be discovered.

For the ultimate confirmation, this needs more data both from the Fermilab muon experiment and from Cern’s LHCb experiment. Results will be forthcoming in the next few years. Fermilab already has four times more data than was used in this recent result, currently being analysed, Cern has started taking more data and a new generation of muon experiments is being built. This is a thrilling era for physics.