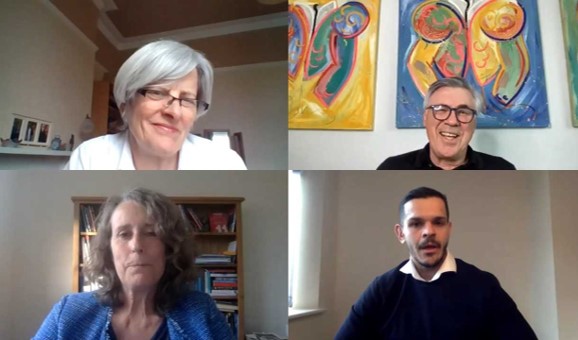 The speaker of five languages, who has won titles in all the major European Leagues, was joined by University of Liverpool Director of the Centre for Sports Business, Professor Sue Bridgewater; and Professor Fiona Beveridge, the University’s Pro-Vice-Chancellor for the Faculty of Humanities and Social Sciences – and an online audience in their thousands – for the in conversation event.

Asked about his early life, Carlo Ancelotti said: “I had a really good childhood. I was born on a farm where all the family were always following the job of the father.

“It was a really peaceful childhood. My father was never angry, and was always calm and patient. I have to say, for my job, I have my first teacher in my father.

“He helped me a lot in my career as a player and a manager.”

He spoke of his pride in his playing career, right from Reggiana to the very top of the game winning European Cups under the legendary Arrigo Sacchi at AC Milan, to his transition into management.

Mr Ancelotti said: “A lot of players have problems when they stop their career but I didn’t because I had the opportunity to go anyway to another job, to be Assistant Manager (under Sacchi).

“It is a completely different job – your career as a player won’t help as a manager.

“But it was the only way to keep my passion alive, because football is my passion, so it was another way to love football.”

His playing career kept him in Italy, but his success in management has taken him to top clubs across the continent. The missing piece was the English Premier League, where he is now leading Everton to the brink of European competition.

Telling the audience he, “really loves Everton, really loves the shirt”, he revealed he chose The Toffees for his return to English football as it is a “family club” rather than one “owned by a company”; adding “you have to take into consideration the culture and tradition”.

Mr Ancelotti said: “I think the relationship with people is the most important part of my job.

“I forced myself to try and speak English because the communication is the most important part; to communicate with the players, to transmit my idea of football to them.”

Compared to elsewhere, he said the “environment in English stadiums is completely different” because here, fans “have passion around the club, passion for the shirt, but it never goes into violence and insult” adding that he has “never been insulted in an English stadium, and I was every time in an Italian stadium”.

Mr Ancelotti put this down the impact of the European ban on English clubs in the 1980s, and the changes it wrought.

In his personal life, he told of his enjoyment living in Crosby, his visits to the beach and his cycle rides to Southport and back – “a long way” – before disclosing that he doesn’t miss Italian food as “I am a good chef, so I can cook wherever I go.”

Responding to a selection of audience questions – from almost 1,500 submitted during the event – Carlo revealed that the best player he played with was Paolo Maldini, that Tom Davies is the player he sees as closest to his own style in the Everton dressing room – “Tom knows this” –  the first thing he does on return to Italy is visit his sister, and one of his greatest achievements was getting hometown club, Reggiana promoted.

He added: “Also, I have to say to win at Anfield as an Evertonian is a fantastic moment.”

The annual Lucrezia Zaina Lecture is funded by a generous legacy bequest from Lucrezia Zaina, who lectured in French and Italian at the University between 1964 and 1988.

Italian has been taught at the University since 1881 and now sits in the Department of Modern Languages and Cultures.