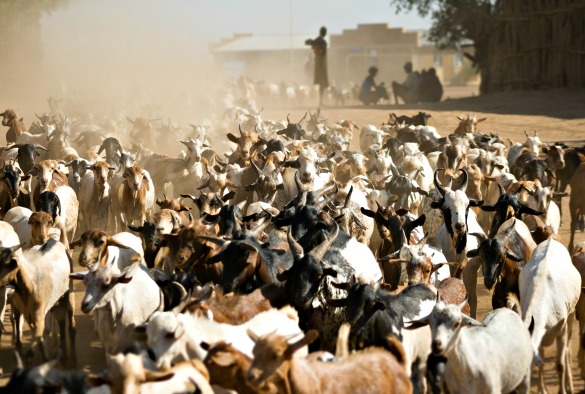 The first ever vaccine target for trypanosomes, a family of parasites that cause devastating disease in animals and humans, has been discovered by scientists.

The study, published today in Nature, was led by the Wellcome Sanger Institute and involved researchers from the University of Liverpool.

By targeting a protein on the cell surface of the parasite Trypanosoma vivax, the researchers were able to confer long-lasting protection against animal African trypanosomiasis (AAT) infection in mice.

Animal African trypanosomiasis (AAT) is a disease affecting livestock in Africa and, more recently, South America. It is caused by several species of Trypanosoma parasite, which are transmitted by tsetse flies, causing animals to suffer from fever, weakness, lethargy and anaemia. The resulting weight loss, low fertility and reduced milk yields have a huge economic impact on the people who depend on these animals. The disease has been said to lie at the heart of poverty in Africa.

A vaccine was long thought impossible due to the sophisticated ability of the parasites to evade the host immune system. As well as a strong vaccine target for AAT, the findings raise the possibility of identifying vaccine targets for other trypanosome species that cause the deadly human infections sleeping sickness and Chagas’ disease.

All trypanosome species have developed sophisticated anti-immune mechanisms that allow the parasites to thrive in their host. For example, African trypanosomes display a protein on their surface that constantly changes and prevents host antibodies from recognising the pathogen. Until now, it was thought impossible to vaccinate against trypanosome infection for this reason.

In this study, scientists analysed the genome of T. vivax to identify 60 cell surface proteins that could be viable vaccine targets. Each protein was produced using mammalian cell lines and then used to vaccinate mice to determine if the host immune system had been instructed to identify and destroy the T. vivax parasite.

One cell surface protein, named ‘invariant flagellum antigen from T. vivax’ (IFX), was observed to confer immunity against infection in almost all vaccinated mice for at least 170 days after experimental challenge with T. vivax parasites.

Dr Delphine Autheman, first author of the study from the Wellcome Sanger Institute, said: “Scientists have been searching for a way to vaccinate against animal African trypanosomiasis (AAT) since the parasite and vector were first discovered in the early 20th century.  We’ve heard a lot about vaccines recently, but compared to a virus protozoan parasites have a huge number of proteins, making it very difficult to identify the right targets. Several of the 60 targets we tested elicited a partial immune response, but only one conferred the long-lasting protection that makes it a promising vaccine candidate.”

Though drugs exist to prevent or treat AAT, many communities that require them live in remote locations that are difficult to access. Reliance on a handful of drugs, and a lack of professional expertise in their administration, are thought to be contributing to increased drug resistance in the parasites3. An effective vaccine would help to overcome some of these practical barriers.

Dr Andrew Jackson, a senior author of the study from the University of Liverpool, said: “It was considered impossible to vaccinate against trypanosome parasites because of the sophisticated immune-protective mechanisms they have evolved, so I’m delighted that we have been able to demonstrate that this can be done. Beyond the obvious benefit of a strong vaccine candidate for animal trypanosomiasis, the genome-led vaccine approach we outline in this study is one that could potentially be applied to other trypanosome species and other parasite families.”

The next step will be to validate the results using a cattle model. If successful, work could begin on developing a vaccine for AAT that would be an important tool for tackling poverty in affected regions.

Dr Gavin Wright, a senior author of the study from the Wellcome Sanger Institute and the University of York, said: “This study is an important first step toward relieving the burden of animal African trypanosomiasis (AAT) on both animals and humans in Africa and South America. The protective effect of the vaccine target we identified will first need to be replicated in a cattle model, but I think we can be cautiously optimistic that in a few years’ time we will have made substantial progress against this devastating disease.”

Michael Pearce, AAT Programme Officer at livestock vaccine organisation GALVmed, said: “Trypanosomiasis remains a major disease challenge for livestock and farmers in Asia, Africa and South America, and is a significant human health problem in Africa and South America. Options for control and treatment of trypanosomiasis are very limited and resistance to currently available medicines is an increasing problem. These novel results from the Sanger Institute are a very important and welcome development, opening up the possibility of successful vaccine development for the prevention and control of trypanosomiasis in both humans and animals.”