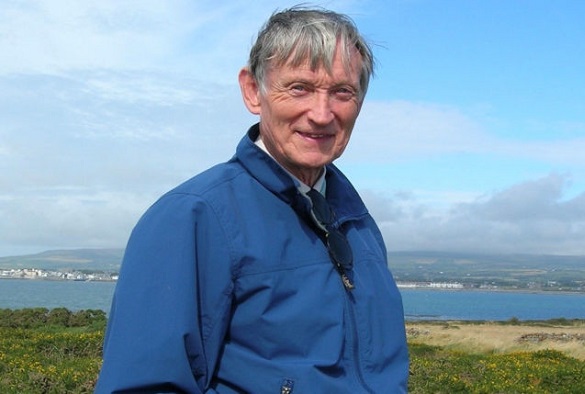 The University is saddened to hear of the passing of Trevor Norton (BSc Hons Botany 1963, PhD 1966) (1940 – 2021) Emeritus Professor of Marine Ecology and Head of the University of Liverpool’s Port Erin Marine Laboratory.

My first lecture from Trevor remains burned in my mind’s eye. Back in 1988 he welcomed a new cohort of undergraduates of the Marine Biology Honours school, including me, with animated warmth. We sat in the low-ceilinged, intimate lecture theatre in Port Erin Marine Laboratory located on the southwestern tip of Port Erin Bay on the Isle of Man.

Trevor was a wiry bundle of energy, mixing a warm humanity with electrifying energy and enthusiasm for his subject, marine ecology. His lively discourse was punctuated with marvellous slides, including one which I will never forget of a killer whale diving in front of the camera in a pale green sea. That is what I wanted, to be in the ocean with beautiful and wild marine life.

Trevor’s passion for the ocean was infectious and at that time Port Erin was in its heyday producing many marine biologists who went on to careers in marine science throughout the United Kingdom and beyond.

Trevor was born in Sheffield in 1940 and grew up in Whitley Bay overlooking the North Sea. In his memoir Under the Water to Get Out of the Rain he recounts that his headmaster regarded him as the “worst boy in the school”. However, Trevor’s academic fortunes turned around after watching Hans and Lotte Hass in the BBC series Diving to Adventure. The idea of adventuring on a yacht with a glamorous partner clearly appealed and he “began to pass exams” as well as take up snorkelling which must have been unthinkably cold off the coast of north east England.

Trevor moved on to Blyth Grammar School and from there won a scholarship to study Biology at the University of Liverpool. It was here that Elsie “Bunny” Burrows, a lecturer in botany, took Trevor under her wing and she later found the funding for a studentship for him to study ecology.

The following years were pivotal in Trevor’s life and his career. He began to study manipulative field ecology in the Isle of Man under the watchful eyes of Norman Jones and a pioneer of women’s diving in the UK, Joanna Kain, a New Zealander. Port Erin Marine Laboratory is just across the road from the Irish Sea and an old broken down breakwater provided an excellent site for experiments to understand what set the depth limits of seaweeds underwater (I myself did my own Honours project attaching scallop cages onto these very same blocks).

Trevor also began what turned out to be a long series of summer trips to Lough Ine (or Lough Hyne), a calm, almost landlocked inlet of the sea on the southwestern coast of Ireland near the town of Skibereen. Here he undertook his research with the rather reserved Jack Kitching and ebullient John Ebling and his adventures are recounted in the charming book Reflections on a Summer Sea. The combination of SCUBA diving and manipulative field ecology to understand what drives the distribution of marine life in intertidal and shallow coastal waters was set. Trevor also met his life-long friend and wife Win Price who was a fellow student supervised by Bunny Burrows in Liverpool.

Following his doctorate Trevor took up his first appointment at the University of Glasgow in 1966. He progressed to a Personal Chair in 1982 before being lured back to the University of Liverpool as Director of the Port Erin Marine Laboratory in 1983. He published more than 180 scientific articles, 30 magazine articles and five popular books. His science covered almost every aspect of the community ecology of macroalgae on the shores of the United Kingdom as well as the animals feeding upon them.

He also worked along the west coast of the USA from Washington State down to Monterey and the Sea of Cortez, most notably on the biology of the invasive seaweed Sargassum muticum. He was President of the British Phycological Society (1989–90) and of the International Phycological Society (1992–94). His services to the wider scientific community included a period on the Annual Review Committee of British Antarctic Survey, Chair of the Aquatic Science Committee of the Natural Environment Research Council and work with the European Commission related to funding of major international research projects.

In 2005 Trevor retired to an Emeritus Professor position with the University of Liverpool to focus on writing his popular books. Trevor was a real people person, full of stories and could hold an audience rapt with his piercing pale blue eyes and loquacious humour. He wrote as he spoke and his popular books on the history of diving (Stars Beneath the Sea), crazy inventors and inventions (Smoking Ears and Screaming Teeth; Imagination and a Pile of Junk) as well as his biographical works (Under the Water to Get Out of the Rain; Reflections on a Summer Sea) are marvellous, light hearted and humorous works well worth a read for anyone interested in marine science, the ocean and diving. His love of people and keen sense of observation really shine through in these works and they are a joy to read.

Trevor’s was a life well lived and he was devoted to his family, Win, his wife and his children Rachel and Paul. He was an inspiration to his students and those he worked with. The laboratory at Port Erin during the time I spent there had a real family atmosphere and students and lecturers alike worked and socialised together. It was a happy time and the institution was very productive academically. That was largely down to Trevor’s leadership, his personable approach to his staff and students and his tremendous energy. Like me, many people will treasure our memories of him and those golden days on the Isle of Man.

Trevor was a dear friend. He and Win were so kind having me as a guest at his own home once when back to visit old friends in the Isle of Mann. My memory of him is as a cheerful, critical, open-minded supervisor and well known Prof in the Port Erin Marine Lab. He supported former students for several years and later on reviewing and co-writing high impact research articles. Our dear supervisor, who led his students to achieve goals throughout academia and their personal lives. A visionary man in the Marine Sciences, he introduced me to wonder in algae-invertebrate interaction and same way guided me on a relationship and marriage to one of his student.

Professor Norton came to Brazil in 1995 as a visiting researcher, delighted to know Rio de Janeiro shoreline and mountain skypes. I was so proud to present him to our colleagues that loved his lectures and workshops and since then became Trevor’s followers. So sad he’s gone, but his work and charisma will not go away from our lives. His work on the biography of seaweed propagules, grazers, and books remain among us, the Academy. Once retired, he wrote and made science more popular by writing on the biography of divers, the evolution and mystery beneath the sea. Indeed his life-history was an event of high ecological significance worldwide. Trevor you are, always be a star above the sea.

We, a group of old friends and contemporaries of Professor Trevor Norton were greatly saddened by the news of his death.  Currently known as the ‘Liverpuddlies’, we were fellow undergraduates and some of us postgraduates with him in Liverpool in the sixties.

Trevor participated keenly in many ‘Biol Soc’ social events, his enthusiasm a catalyst for all those around him. In sports his name would be high on the team sheet be it soccer or marbles. With other Liverpuddlies he played soccer for Star Utd in the Liverpool A-League and in charity matches against Liverpool music scene celebs. When it came to Biol Soc reviews or newsletters Trevor was the leading light.  His “Three Cytochromes From Krebs Are We” to the tune of “Three Little Maids From School Are We” was a masterpiece.

In later years his literary skills and sharp mind were exercised in publication of a collection of highly entertaining volumes on science and technology, which went well beyond his own specialisation.

We kept in touch with Trevor and his dear wife Win, and had the pleasure of visiting them in the Isle of Man from time to time.  Throughout, Trevor entertained us with his special brand of wit and humour.  It was a great privilege and pleasure to have been numbered among his friends.

For anyone who would like to record your memories of Trevor you can do so at: https://www.legacy.com/guestbooks/iomtoday-uk/trevor-norton-condolences/197936828?cid=full