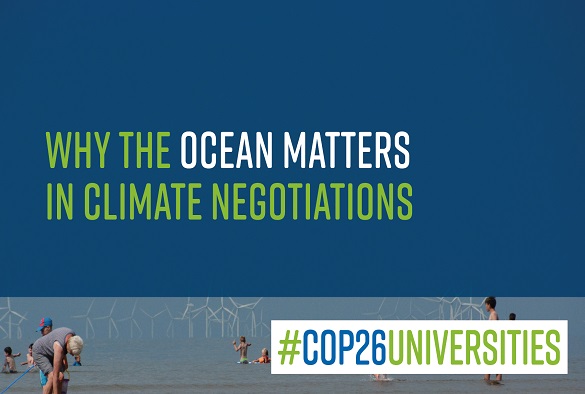 On World Oceans Day, and ahead of the G7 later this week, a group of leading UK experts -including Professor Jonathan Sharples and Professor Ric Williams from the University’s School of Environmental Sciences –  shine a spotlight on the critical role the ocean plays in greatly slowing the rate of climate change but also the subsequent impacts of this and why support from nations for better inclusion of the ocean at the United Nations climate negotiations, such as COP26 in Glasgow this November, is so important.

Entitled `Why the ocean matters in climate negotiations’, the briefing summarises the latest research and knowledge on the importance of the ocean, as well as offering a range of opportunities to nations in order to ensure that the ocean can be developed sustainably for the benefits it provides to people around the world.

The key messages are:

Led by Plymouth Marine Laboratory, the breifing has been developed by a team of experts from leading UK marine and environmental science universities and centres and published in association with the COP26 Universities Network, and it also makes suggestions on how the ocean can be better incorporated in the United Nations Framework Convention on Climate Change (UNFCCC) process.

The experts also emphasise the ecological, social and economic importance of coastal seas and the open ocean. Coastal seas are often busy places and face a diverse range of pressures so, therefore, require careful and sensitive management to not only ensure protection but also help these areas meet their potential for both climate change mitigation and adaptation.

Further afield but no less important, the open ocean holds about 90% of the extra heat stored on the planet from global warming and the biological activity that occurs in the upper layers accounts for about half of the primary production on Earth. Traditional sectoral and regional approaches to the High Seas needs to be replaced by an effective all-ocean system management, including an integrated observational and data infrastructure and increased financial investment.

Liverpool’s Professor Jonathan Sharples, one of the report’s authors, said: “Our coastal seas are under particular threat from climate warming and over-exploitation. But at the same time with proper management, they have great capacity to help us achieve net zero carbon emissions and prevent further drift of Earth’s climate into a dangerous future”.

Professor Ric Williams, Chair in Ocean Sciences at the University also co-authored the report. He said: “The ocean acts to mitigate some of the adverse effects of climate change and thankfully reduces surface warming  by taking up and storing excess heat and carbon. However, that mitigation comes at a price, the ocean itself is getting warmer, sea level is rising and the ocean is acidifying. This report is to highlight the importance of the ocean in the coming climate COP26 talks in Glasgow”.

Peter Thomson, UN Secretary-General’s Special Envoy for the Ocean, commented: “It is heartening to see this timely ocean briefing by leading UK academics on why the ocean matters in climate negotiations. The briefing hits the nail on the head when it highlights that while a healthy and biodiverse ocean is central to all life on Earth, it is too often neglected in high-level climate negotiations. The Climate-Ocean nexus is inseparable. This is a fundamental message as we prepare for the all-important UNFCCC COP26 in Glasgow this November”.

Professor Hans-Otto Pörtner, Marine Biologist at the Alfred Wegener Institute and the Co-Chair of the Intergovernmental Panel on Climate Change (IPCC) Working Group II, commented: “This is an impressive account on the ocean under climate change in a nutshell. It touches on what the ocean does for humankind and the living planet, how it is suffering from being overburdened by human waste and human-made climate change. At the same time, with sustainable management, the ocean offers opportunities that can help strengthening its resilience, its biosphere and other services to people and their well-being”.

Lead author, Dr Carol Turley OBE of Plymouth Marine Laboratory, said: “The ocean is at the front line of climate change experiencing massive changes because it is receiving much of the excess heat, CO2 and water caused by our changing climate so ambitious mitigation is essential for the ocean. Yet it also offers a wealth of adaptation options such as creation of offshore wind,  protection of marine carbon stores, sustainable fisheries and creation of marine protected areas – so the ocean is going to be a busy place requiring improved ocean governance and management and the finance and observational capacity to support and monitor how it is faring if it is going to be managed sustainably for the benefit of its biodiversity and society. It seems amazing to me that the largest ecosystem on Earth, the ocean, has received such little attention during previous climate negotiations – this briefing aims to help rectify that by explaining why the ocean is important to life on Earth and by giving recommendations for actions that nations can take.”

The University of Liverpool’s Climate Futures research challenge brings together experts in a wide range of disciplines to explore impacts of climate change, develop solutions to environmental challenges and address knowledge gaps. 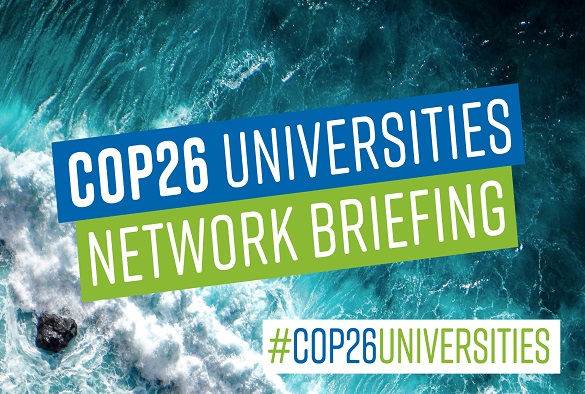