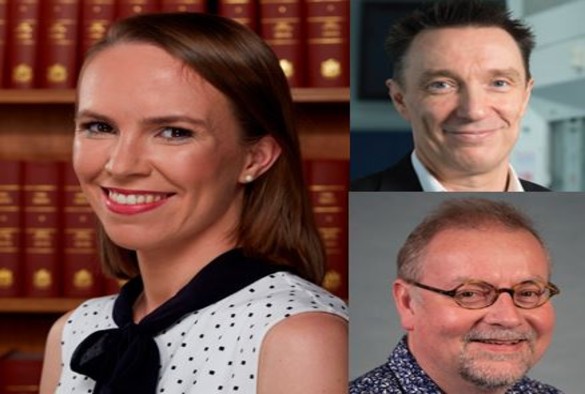 The Nose-to-Diagnose Team of Universities of Manchester and Edinburgh, with collaborators in the Netherlands, in industry, and at the University of Liverpool, have been named the winner of the Royal Society of Chemistry’s new Analytical Division Horizon Prize: Robert Boyle Prize for Analytical Science.

The Nose-to-Diagnose team becomes one of the first winners of the Royal Society of Chemistry’s new Horizon Prizes, introduced after the organisation carried out a wholesale review of its recognition portfolio to better reflect modern science and its impacts in making the world a better place.

Dr Heazlewood won the prize for the development of novel experimental techniques and computational modelling to study reactive collisions at extremely low temperatures. Dr Heazlewood also receives £3000 and a medal.

Important gas-phase chemical models suffer from a lack of experimental data and therefore have limited use as predictive tools. Certain classes of gas-phase reactions – for example, those involving ions (atoms or molecules with a net charge) or radicals (atoms or molecules with an unpaired electron) – can exhibit unusual properties, proceeding faster as the temperature decreases. Dr Heazlewood’s group have introduced new methods that enable them to control the reaction parameters and precisely monitor reactions at low temperatures. The systems they study are relevant to environments such as the outer atmosphere and interstellar chemistry.

Their experimental measurements have advanced our understanding of reaction mechanisms, and will improve the accuracy of models of atmospheric and interstellar chemistry.

On receiving the prize, Professor Cooper said: “It was a huge technical challenge to build an autonomous robot chemist, requiring skills across the areas of chemistry, computer science and robotics. I credit this Prize to the ingenuity and perseverance of the team that did this work.”

Professor Cooper and his team are building robots powered by artificial intelligence that can search for new materials to tackle important problems, such as energy. Their aim is to develop robots that can find new combinations of materials that would not be discovered by more conventional research approaches.

Dr Helen Pain, Chief Executive of the Royal Society of Chemistry, said: “All of us have experienced tremendous challenges in the last year and the chemical sciences community has been integral to how the world has responded on a number of levels. From developing vaccines for COVID-19 to continuing to work towards a more sustainable world – the contribution of chemical scientists has never been more tangible or important.

“In a recent review of our recognition portfolio, we committed to ensuring that our prizes reflected the incredible diversity and excellence of chemistry being carried out today. The work of Dr Heazlewood and Professor Andrew Cooper is a prime example of what we are so passionate about and we are proud to recognise her contribution with this prize.”

The Nose To Diagnose team, which includes the University of Liverpool’s Professor Roy Goodacre, receives the prize for a novel approach to early Parkinson’s disease diagnosis and stratification using a simple non-invasive skin swab. This was developed following the observation of retired nurse Joy Milne, who has the ability to use her sense of smell to distinguish Parkinson’s.

The Nose To Diagnose team has shown it is possible to identify Parkinson’s disease based on compounds found on the surface of skin. The findings offer hope that a pioneering new test could be developed to diagnose the degenerative condition through a simple painless skin swab.

Joy, whose husband was diagnosed with Parkinson’s at the age of 45, works with the team in the role of Lead Nose, using her incredible ability to distinguish Parkinson’s in individuals by detecting a distinctive “musky” odour, even before symptoms emerge in those affected.

Parkinson’s disease is a condition in which parts of the brain become progressively damaged over many years, resulting in a range of physical and psychological symptoms. The team developed a technique which works by analysing compounds found in sebum (the oily substance that coats and protects the skin) to identify changes in people with Parkinson’s disease. Sebum is rich in lipid-like molecules and is one of the lesser studied biological fluids in the diagnosis of the condition.

With high resolution mass spectrometry, the team were able to profile the complex chemical signature in sebum of people with Parkinson’s and show subtle but fundamental changes as the condition progresses. These promising results could lead to a definitive ‘world first’ test to diagnose Parkinson’s accurately, speedily and cost effectively. The skin swab could also provide an incredibly important new tool in clinical trials, by helping researchers measure whether new, experimental treatments are able to slow, stop or reverse the progression of Parkinson’s.

Working with the University of Manchester Innovation Factory, the team has patents filed for their diagnostic techniques and have created a spin-out company Sebomix Ltd. to commercialise the new tests.

The Royal Society of Chemistry’s prizes have recognised excellence in the chemical sciences for more than 150 years. In 2019, the organisation announced the biggest overhaul of this portfolio in its history, designed to better reflect modern science.

Of those to have won a Royal Society of Chemistry Prize, over 50 have gone on to win Nobel Prizes for their pioneering work, including 2019 Nobel laureate John B. Goodenough.