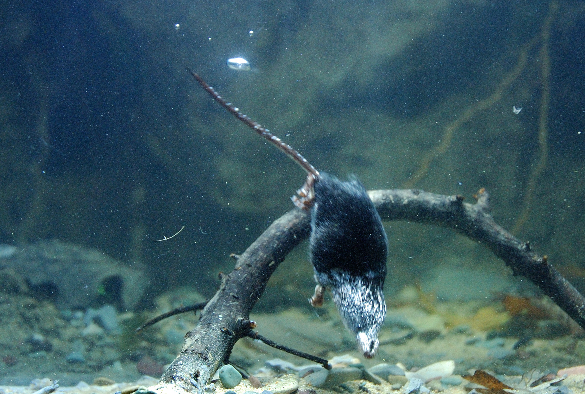 New research by University of Liverpool scientists and international collaborators has revealed how the world’s smallest diving mammal – the water shrew – evolved to survive for long periods underwater without breathing.

“Water shrews are perhaps the most unlikely of all underwater foragers. Their low body oxygen stores coupled with the highest rates of oxygen use and loss of body heat among mammals provide formidable challenges to spending any time underwater,” explains Liverpool researcher Dr Michael Berenbrink.

The team’s new study, published in the journal eLife, sampled DNA from 71 different shrew and mole species all belonging to a large group of related, insect-eating mammals called Eulipotyphla.

In contrast to previous studies that relied on morphological similarities and a fragmentary fossil record, the researchers used a novel comparative molecular approach to map the evolution of the oxygen-binding protein myoglobin and reconstruct the origins of diving lifestyles within the group.

Dr Berenbrink, who was a co-lead author on the study, said: “Our research resolves the century-old controversy about the evolutionary origins of this unlikely specialised lifestyle among shrews and slightly larger moles in one of the most diverse and species-rich order of mammals.

“It is an example of the value of long-term, low cost international research collaboration, that utilises museum collections and field work to build up comprehensive data sets over many years. I am particularly proud of co-author and Liverpool Zoology graduate Hannah Czolacz, whose undergraduate project work contributed to this research.”

The research has also been featured by the BBC.