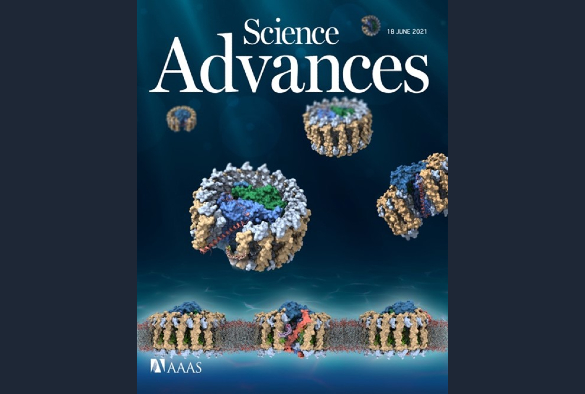 Scientists from the University of Liverpool have uncovered the atomic structure of a special photosynthetic supercomplex to determine how it forms and performs efficient electron transfer.

The study features on the cover of the latest edition of the journal Science Advances.

Purple bacteria are single-cell microorganisms and represent one of the earliest life forms on Earth. These microscopic organisms use sunlight as their source of energy, taking advantage of efficient photosynthetic apparatus located in their photosynthetic membrane.  The bacterial photosynthetic apparatus is made of a series of pigment-protein complexes. Through these pigment-protein complexes, solar energy is captured and then converted into chemical energy to power all the functions of the cell.

The central component of bacterial photosynthetic apparatus is a RC–LH1 core supercomplex, which is formed by a light-harvesting 1 ring (LH1) surrounding the reaction centre (RC). LH1 captures the photons of sunlight and funnels them to the RC, where the solar energy is converted to chemical energy.

Using high-resolution cryo-electron microscopy (cryo-EM), the research shows a special RC–LH1 structure from a purple photosynthetic bacterium Rhodobacter veldkampii. Unlike a closed LH1 ring found in many purple bacteria, this RC–LH1 core monomer has a “C-shaped” LH1 ring with a large opening. The study further discovered that this opening is formed by an extra protein peptide called PufX. PufX works as a molecular “cross brace” to bridge the RC and LH1 and stabilise the RC–LH1 core structure.

The PufX-formed “gate” in this RC–LH1 core supercomplex is the largest among the reported photosynthetic RC–LH1 structures. It provides a big channel for the electron carrier molecules called quinones to diffuse across the LH1 barrier for efficient electron transport. The researchers further used computational approaches to confirm the exchange of quinones through the specific channel.

“Nature has created various intriguing photosynthetic RC–LH1 architectures in ecologically diverse purple bacteria,” said Professor Luning Liu at the University of Liverpool, who led the research. “This structural variation represents the distinct mechanisms of energy transfer and electron transport adopted by the photosynthetic apparatus. It allows bacteria to survive in their specific niche. Learning how native photosynthetic complexes are formed and fulfil functions is important for understanding the photosynthetic processes and physiological regulation. We will thus have better solutions to improve photosynthesis and underpin bioenergy production.”

The research was carried out in collaboration with Professor Shirouzu from Riken, Dr Terada from the University of Tokyo, and Dr Canniffe at the University of Liverpool. The study’s first author Laura Bracun was funded by a Liverpool-Riken PhD studentship.