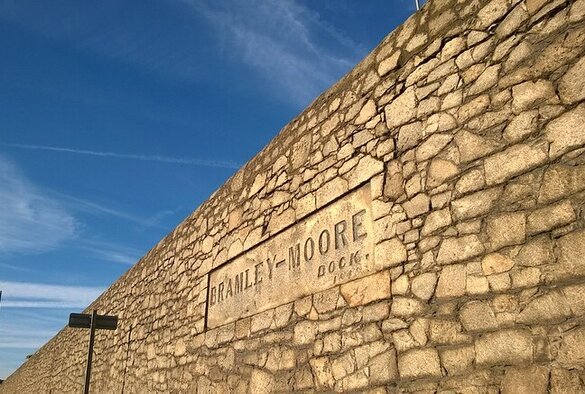 Professor Michael Parkinson CBE is the author of 1985’s Liverpool on the Brink and Liverpool Beyond the Brink in 2019, and Ambassador for the University of Liverpool’s Heseltine Institute for Public Policy, Practice and Place

Liverpool was designated a World Heritage Site by UNESCO in 2004 as ‘the supreme example of a commercial port at the time of Britain’s greatest global influence’. However, it risks losing that status because today the secretariat has recommended Liverpool be deleted from the list. Although, in Euro2020 speak some might ‘think it’s all over’, it isn’t quite yet. But, we are in the final minutes of added time! The final decision will be taken by 21 UNESCO Ambassadors on its World Heritage Committee in China this July. Although they don’t often do so, they could reject the recommendation and allow Liverpool to retain its status – or at least defer a decision. The real battle starts now to make sure a majority of them do so. The city’s leadership is at its most united on this issue since it won Capital of Culture in 2004.  Almost 30 major players from politics, the universities, churches, football, business, architecture, and culture, supported by Lord Michael Heseltine – one of the architects of Liverpool’s renaissance – have come together to ask UNESCO to defer making its decision in July. They want UNESCO to visit Liverpool to see how much it has done to conserve and invest in its heritage.

What’s the row about?

For several years UNESCO has argued that Liverpool has not done enough to preserve the derelict, though now developing, near north docks owned by Peel Holdings; and that Peel plan contains too much high-density development,  with too many high buildings, which will destroy the so called Outstanding Universal Value of the World Heritage Site (WHS). It also now argues that Everton’s recently approved plan to partially fill in the dock at Bramley Moore while building a new football stadium is the final straw.

Liverpool, by contrast, argues it has always filled in existing docks to allow new development. It also argues it has always built tall buildings. Crucially, it argues that because it has spent £740m on its heritage assets and has £350m in progress, the site is in better condition than when it was designated in 2004. Also, UNESCO is worried about only one sixth of the whole WHS. It does not have a problem with the rest of the area, which covers much of the city centre. But the north docks are exactly the area that needs regeneration. They collapsed when the port declined, leaving the people living in the area marooned in a sea of economic decline. It is one of the poorest parts of the UK – indeed of Europe. And it missed out on the city’s extraordinary, if incomplete, renaissance during the past 20 years. It is its turn.

In fact, there is a lot of good heritage work going already in the north docks. The developments at Stanley Dock, and in particular the incomparable Titanic Hotel and the Ten Streets projects, show how heritage can be both conserved but modernised and brought into economic use. The planned Everton stadium project at Bramley Moore dock would be the biggest development Liverpool will see in the next decade. The dock itself has been derelict and cut off from the city by a high wall for 60 years. It is a desolate former coal yard sitting next to a major sewage treatment plant. It is at the extreme end of the WHS and arguably should not have been designated in the site in the first case.

The Bramley Moore project is huge – on the same scale as the European Objective One money and Liverpool One development that transformed the city over the last 20 years. It would be a crucial piece of the city’s overall future economic jigsaw, linking north Liverpool back to the city centre and transforming the waterfront. Everton’s £500m investment would be part of a larger £1.3 billion boost to the local economy. It would create 15,000 local jobs; attract 1.4m visitors a year; provide £32m in income for local families; generate £2.2m in council taxes and £1.7m in business rates for the city councilm and contribute £237m of social value. Specifically, it would invest over £50m to protect the dock’s heritage assets, which are now simply rusting away.

The stadium design is brilliant, potentially the greenest, most accessible in the UK – reflecting the architecture of the original stadium. Arguably, it could become Liverpool’s Guggenheim. Over 60,000 people were consulted on the plan and gave it 95% approval. The club has an extraordinary record of supporting its local community through Everton in the Community, and it will be leaving Goodison Park as a genuine community asset. The government itself has decided not to ‘call in’ the decision, which suggests that it believes if building the stadium led to deletion the economic benefits outweigh any costs. If the city lost WHS status because of Bramley Moore it would be a real shame. If Liverpool lost the biggest development that will happen in the next decade it would be closer to a tragedy!

How did we get to here?

There is culpability all round. Liverpool city council has not always managed its relationships with UNESCO as well as it could. It has not always been quick enough to produce plans or documents. It did not always get all the local partners inside the tent.  It did not always make its case well enough to the public or UNESCO. And when it won the transformative Capital of Culture in the same year 2004, arguably it took its eye off the heritage ball.

But UNESCO has contributed to the impasse. It is a classic international organisation which is neither the easiest nor most flexible deal with. Its language of ‘Outstanding Universal Value’, ‘State Parties’ and ‘Buffer Zones’ is obscurantist and makes it difficult to see what the real issues are. It has increased global responsibilities but with less money. It looks after 1300 sites world-wide. So, it is increasingly stretched and not always as light on its feet or as up to date with changes on the ground as it could be. And outdated misconceptions can stick. Also, it has its own advisory body, International Committee on Monuments and Sites (ICOMOS) which is very conservative in it views and whose role in decision making is not entirely transparent or accountable. UNESCO’s annual decision-making Committee meetings are very crowded, very formal and discussion is often perfunctory. Overall, UNESCO like ICOMOS seem more at ease with monuments rather than developing urban sites like Liverpool. Also, UNESCO only deals with national governments, not cities. So, there are many fingers in the pie which can create misunderstandings. The UK government often finds its role in the middle of the process an awkward one. As a result, until recently there has been too much megaphone diplomacy and too little nuanced and genuine debate.  But this is all history. We need to understand it – but not repeat it. Liverpool has changed.

Where are we now?

In recent years, Liverpool has worked hard to persuade UNESCO of their good intent hosting Ambassadors and officials and sending a delegation to Paris. It is now completing – although delayed first by austerity cuts and now COVID – its Local Plan for the whole area and a policy on tall buildings which clarifies its intentions for the city centre. The Mayor’s World Heritage Site Task Force, on which I have sat since 2018, helped produce The North Shore Vision in 2020 – the first comprehensive plan for the sustainable development of the whole area. It has also just produced a stock take Liverpool: A World Heritage City, which basically supports the city’s case that it takes its heritage seriously; has invested substantially in it; and has successfully balanced the need to protect its heritage with the need to deliver economic prosperity to the very many, still very deprived areas of the city. Crucially also, Peel’s development plans have changed radically from the original ones to which UNESCO objected. None of the high-rise buildings proposed in the original planning application have ever been built. They probably never will be because the market won’t sustain them! Their revised plans for Liverpool Waters are more place sensitive, more sustainable, with much lower densities, fewer tall buildings and on a more human scale. On this issue UNESCO is in danger of looking like it is fighting the last war!

Where are we going next?

Liverpool is still emerging from an awful pandemic which has had a massive impact upon its crucial city centre economy. The city council itself is also having to develop a huge improvement programme after the recent critical Caller report. At the same time the pandemic crisis has pulled together all the city’s institutions in a remarkable display of unity on the public health crisis – but also on many other issues including heritage.  Critically, the first black woman to lead a major UK city, Joanne Anderson, has been elected as Mayor. She is heavily involved in the critical reassessment of one very difficult part of Liverpool’s heritage – its role in the slave trade. Ironically, it was that imperial past and global role – with all its sensitivities – that got Liverpool the status in the first case. For all these reasons, this is not the time for UNESCO to pull the plug on Liverpool.

The city leaders will continue to promote its very good case and ask UNESCO to postpone a final decision.  But UK government is in the negotiating lead so must do everything it can to change the minds of most of the committee. Everyone who believes the city has a good case should do everything they can to influence public opinion, the media and government. Whatever the outcome, the city’s case would at least be better understood.

So, what risks for whom?

Liverpool does not want to lose WHS status. But even if it did, it could and will still claim to be a leading World Heritage City. There over 1300 World Heritage Sites. But there is only one Liverpool. People come to it because it is a self-regarding, infuriating but fascinating, exciting place where you never quite know where the story is going. They won’t stop coming because the plaque has gone. Deletion would also throw some light on the argument about the economic value the city gets from WHS status. Some question the scale of that value and therefore the scale of economic damage if the status was lost.  A few siren voices think it is an economic millstone.

Also, heritage is not just the buildings that people built. It is also the culture and values of the place they created. They should also determine if its heritage is of world status. The Liverpool debate has focused too much on building heights and not enough on the quality of the place. The city leaders and its people must talk about this aspect of heritage now. But we must make those decisions by and for ourselves.

In fact, UNESCO might want to reflect on the risks to itself of deleting Liverpool. If it does so, the city will suffer some short-term reputational damage. So would the UK heritage movement more widely. But in the longer term I am not persuaded that Liverpool’s economic and cultural prospects would be dramatically affected. However, UNESCO itself could suffer reputational damage. The Bramley Moore project will not only drive the city economy, it will increase the value of the heritage in a crucial part of the city. Liverpool’s current leaders would be betraying their forefathers, who endlessly innovated to develop Liverpool’s maritime economy and heritage, if they simply stopped good development in deference to an international organisation. So, if UNESCO does delete Liverpool, that decision could seem disproportionate. In fact, I suspect it would seem to lack common sense. Liverpool’s leaders have offered a genuine olive branch. I think UNESCO would be well advised to accept it.