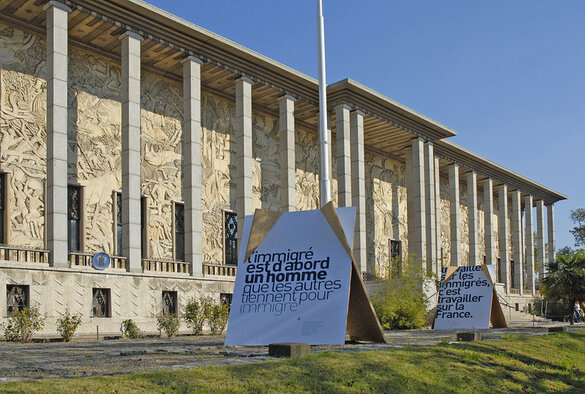 Today is the third National Windrush Day in the UK. This day celebrates the contributions of Caribbean people to British society. France also encouraged workers to migrate from its overseas Caribbean departments of Martinique and Guadeloupe to plug the labour gap after World War Two. While there are currently no museums, memorials or statues to commemorate this migration, local community groups in France and the Caribbean are remembering this migration in their own way.

Caribbean Migration: From the Windrush to the BUMIDOM

Caribbean migration to Britain did not begin with the arrival of the Empire Windrush on 22 June 1948. Although there was a black presence in Britain before the 20th century, World War One brought soldiers from the Caribbean colonies to fight for the motherland. Many soldiers remained in Britain after the war. Mass migration began after World War Two. The Empire Windrush was not the first ship to arrive: the SS Ormonde reached Liverpool in April 1947, and the Almanzora docked at Southampton in December 1947. However, memories of these arrivals have long been overshadowed by that of the Empire Windrush. Life was difficult, and it was almost impossible for Caribbean communities to find housing because of the ‘colour bar’ policy which discriminated against them.

This migration is tied to British colonial history. The communities settling in Britain were predominantly from Jamaica, Trinidad, and Barbados, which were part of the British Empire until their independence in 1962 (Jamaica and Trinidad) and 1966 (Barbados). Caribbean peoples migrated to Britain as colonial subjects until 1948, when they became ‘citizens of the UK and Colonies’ via the British Nationality Act. This meant that they had the right to work and travel within the Commonwealth as citizens. In 1962, the Commonwealth Immigrants Act was passed, limiting migration to specific categories of workers or dependents.

Only a year after the UK had restricted immigration from the Caribbean, France was actively facilitating it. The difference lies in their constitutional situations. France was encouraging migration from its overseas departments of Guadeloupe and Martinique, which, constitutionally, were and remain part of the French Republic. In contrast, the UK was limiting immigration at a time when these Caribbean islands were becoming independent nations.

What is unique about migration to France is its institutional nature. From 1962 to 1983, 160,000 people migrated through the BUMIDOM (Bureau for the development of migration in the overseas departments). A similar number migrated outside this framework, assisted by family or friends already settled in France. Their travel was financed by the state and they were given work in transportation and the domestic service sector. For some, the BUMIDOM was an opportunity for social advancement; but for others, it was exploitative and coercive.

The BUMIDOM played an important role in bringing Caribbean workers to mainland France, but there is no statue or museum in France which commemorates this migration. There is a museum dedicated to the history of immigration – the Musée national de l’histoire de l’immigration (see image) was opened in Paris in 2007. However, the BUMIDOM does not appear in the permanent exhibition about the history of immigration to France. A new permanent exhibition is being curated, under the direction of Patrick Boucheron. In a report published in 2019, Boucheron sets out his vision for the exhibition, and it is likely that the BUMIDOM will feature, but it is unclear how much emphasis it will be given.

It seems that the French state has avoided memorializing the BUMIDOM because it would mean owning up to the racialized treatment of France’s Caribbean citizens. France’s political model of Republican universalism does not recognise identity categories such as race. In theory, all French citizens are equal in the eyes of the Republic. The problem of this ‘colour-blind’ policy is the fact that, while intending to avoid racial inequalities, it refuses to acknowledge that racism exists. Yet the BUMIDOM did operate on racial lines, and so commemorating it would be an acknowledgement of the stigmatization the scheme caused.

Due to a lack of official museums and statues, local communities have created their own commemorative initiatives. For instance, the Facebook group ‘Enfants du BUMIDOM’ seeks to inform, educate, and unite people whose shared history is formed around the BUMIDOM.

In contrast, statues are planned in the UK to commemorate the migration of the ‘Windrush’ generation and their descendants. A national monument will be erected at Waterloo station and unveiled on Windrush Day 2022. In addition, local authorities have changed place names – the area in front of Brixton Tate Library was renamed as Windrush Square in 1998.

However, there is some resistance among Caribbean communities about these government-led initiatives. Arthur Torrington, a founding member of the Windrush Foundation, has spoken out about his anger over the lack of consultation between the government and Caribbean groups. Historian and activist, Patrick Vernon has proposed an alternative monument. He is working with the Maritime Archaeology Sea Trust to create a monument out of the anchors of the Empire Windrush.

While in the UK there has been some institutional attempt to incorporate Caribbean migration into the fabric of British history, this is mostly lacking in France. This commemoration – or lack of – reveals a great deal about British and French attitudes towards migration, citizenship, and race.