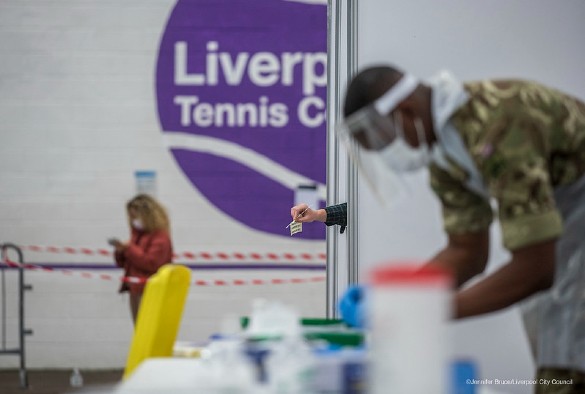 An evaluation of the Liverpool pilot of rapid antigen testing for people without official COVID-19 symptoms found it may improve detection of cases and reduce virus transmission when driven at scale by the local public health service.

The evaluation of this national pilot was led by the University of Liverpool for the Department of Health and Social Care (DHSC).

Researchers found that a low-cost, rapid, no-lab approximate test of infectiousness could improve COVID-19 management by saving around a day in the time it takes to identify someone as likely to pass on the virus, and by being able to test more people.

Coordination of testing with timely data integrated across NHS and public health organisations was critical to success. The Combined Intelligence for Population Health Action (www.cipha.nhs.uk) system used to coordinate testing is now expanding to other regions and could contribute to building up a ‘national grid’ of public health data systems needed to improve pandemic responses.

The Liverpool ‘mass testing’, or community testing, pilot in November 2020 was the first of its kind in the world, designed to evaluate drop-in voluntary testing for the COVID-19 virus, open to all residents over the age of 5 years without symptoms in a large city. The testing service was found valuable and has been continued beyond pilot as a core part of Liverpool’s COVID-19 response.

A SMART1 (Systematic, Meaningful, Asymptomatic/Agile, Repeated Testing) approach was taken in order to adapt to changing circumstances such as new variants and keeping essential services open.

There was strong public awareness of, and a largely positive attitude toward community testing, motivated by shared identity, civic pride and a wish to protect others.

During the evaluation period (6 November 2020 to 30 April 2021), 283,338 (57%) Liverpool residents took a test using the Innova SARS-CoV-2 antigen rapid antigen lateral flow device. The devices worked as expected, identifying most cases with high viral load, likely to be the most infectious.

People living in more deprived areas were less likely to take up testing and more likely to test positive. Fear of loss of income in self-isolation was a significant factor in this inequity in testing.

It is estimated that Liverpool’s community testing led to an 18% increase in case detection and a 21% reduction in cases compared with other areas up to mid-December, after which the Kent variant surge made it difficult to compare areas.

Professor Iain Buchan, Dean of the Institute of Population Health and lead for the evaluation of Liverpool community testing pilot, said: “Introducing rapid antigen testing for people without symptoms of COVID-19, living or working in the City of Liverpool in November 2020, saw cases fall by a fifth, while the ability of the public health service to detect new cases – with or without symptoms – rose by a fifth.

“No other city or region was exactly like Liverpool at the time in terms of the pandemic or its restrictions, but with careful analysis of data from across England, we have shown that rapid antigen testing was a useful addition to other public health measures.”

“The lateral flow devices performed as expected from biology, identifying people with bigger loads of virus, more likely to be infectious – and doing so in less than an hour they enabled isolation a day sooner than was possible with PCR tests.

“Effective testing for the COVID-19 virus, however, is much more than a test. People in disadvantaged areas, and those with fewer digital resources, found it more difficult to access testing or to afford to isolate. The local public health team was vital in adapting testing to reach as much of the population as possible. Local approaches were also key to understanding how to offer daily testing as an alternative to quarantine for contacts of cases.

“The city-wide teamwork and data integration needed to deliver community testing in Liverpool are assets likely to outlast the pandemic. A national grid of intelligence-led local public health systems is needed to resist the next pandemic and to recover from this one – an important conclusion of our evaluation – a bigger picture than testing for virus antigen.”

Liverpool’s Director of Public Health, Matthew Ashton, said: “The Covid-19 testing pilot was cutting edge public health work in action and a substantial number of people in the city embraced it.

“It helped cement regular testing as a way of identifying those with the virus who would have been unknowingly spreading it to others, and contributed to the fall in the infection rate we saw in Liverpool over the course of the pilot. It proved to be hugely valuable at a point in time when the vaccines had not yet been rolled out.

“It also reinforced challenges we face across all areas of public health, such as how to reach those in deprived areas, and helped us to work together with partners to address them.

“We hope our learning can be used by Governments here and abroad, not just in managing Covid-19 but also in future pandemics.”