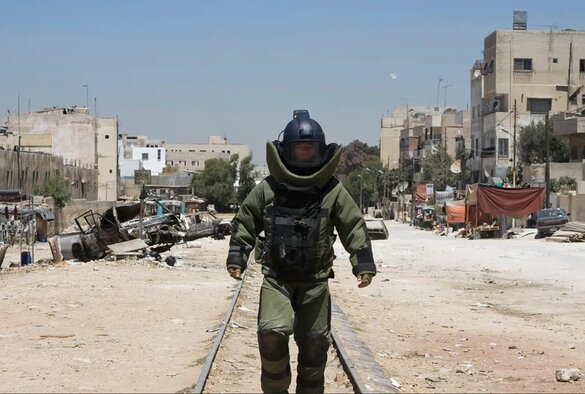 Maria Flood is a Lecturer in Film Studies in the University of Liverpool’s Department of Languages, Cultures and Film

One of the most common responses to the events of September 11 2001, both among witnesses on the scene and more distant commentators, was that the destruction of the World Trade Center was like something only seen in the movies. This famously prompted veteran director Robert Altman to declare that 9/11 was an instance of life imitating art: “The movies set the pattern, and these people have copied the movies.”

If the terrorist attacks had appeared like a movie, then the immediate response of Hollywood was that films released in the aftermath of the event should not be too much like 9/11. Representations of the World Trade Center became taboo. The original teaser trailer for Spider-Man (2001) showing the Twin Towers was withdrawn, while the climactic final scene of Men in Black II (2002) had to be reshot. For various other releases, the Twin Towers were erased in post-production.

Later on, the towers would be digitally restored for the 2006 US docudrama disaster film, World Trade Center, directed by Oliver Stone. The film reconstructs events from the point of view of policemen getting caught in the North Tower when the South Tower collapses. Like Paul Greengrass’s United 93, released the same year, Stone’s film celebrates resilience in the face of terrorism while giving viewers access to events previously unseen.

Other cinematic forms offered more oblique evocations of the terrorist attacks. Steven Spielberg’s 2005 adaptation of War of the Worlds transplants H.G. Wells’s late-Victorian story to post-9/11 New Jersey and Boston. The tagline of the film, “they’re already here”, echoes fears of sleeper cells, suggesting that the enemy is already in the US – undetectable and waiting to be activated. After the alien tripods have emerged from below the ground to wreak havoc on innocent bystanders, the protagonist’s daughter asks her ash-covered father: “Is it the terrorists?”

Imagery reminiscent of 9/11 also abounds in The Dark Knight (2008), the second instalment of Christopher Nolan’s celebrated Batman trilogy. Casting Joker as a terrorist, the film sheds an ambivalent light on Batman’s pursuit of counter-terrorist justice.

The Dark Knight played a crucial part in the boom of superhero films that continues to dominate mainstream cinema. It’s perhaps no coincidence that this ongoing boom roughly coincides with the so-called “war on terror”, and particularly the ill-fated invasion of Iraq.

In a time of increasingly complex geopolitical entanglements and moral failings, these films articulate a yearning for unsullied heroism, effective leadership and appropriate responses to crises.

The invasions of Afghanistan in 2001 and Iraq in 2003 initially found widespread support in the US. In October 2001, a poll found that 88% of those in the US backed a military response to the terrorist attacks. Yet as the wars continued, support declined significantly. The realist dramas of Kathryn Bigelow, in both The Hurt Locker (2008) and Zero Dark Thirty (2012), reflect the moral ambiguity of the US position in the Middle East.

Films like Eye in the Sky (2015), meanwhile, capture the impersonal nature of long-range drone warfare. On TV, the hugely popular series Homeland (2011-2020) tracks the entanglements of Americans and Iraqis in the sphere of counter-terrorism and radicalisation.

Many of these narratives centre on the figure of the white Western woman, perhaps as a way to “soften” the US image abroad. This movement away from blockbuster thrillers to more personal dramas is in line with Obama’s stated shift towards a form of “humane warfare”, a move some have called “the humanisation of interminable conflict”.

The terrorist and the hero

The figure of the terrorist has also evolved in post-9/11 cinema. In the 1980s and 1990s, terrorists that were coded as Muslim or Arabic in films like True Lies existed alongside the Germanic villains of Die Hard or the IRA man found in films like The Devil’s Own and The Crying Game. Yet after 9/11, terrorism is mainly equated with jihadism in Hollywood films, where terrorists are often denied any deep characterisation and contrasted with US heroes.

Clint Eastwood’s American Sniper (2014) is a prime example of this. Telling the story of Chris Kyle, one of the most lethal snipers in US military history, the film split critics, with the left-wing press describing it as Republican propaganda, while the right-leaning National Review praising the movie for capturing “the true nature of the enemy” – the Iraqis that the central character calls “savages”.

But filmmakers from around the world have also sought to capture the ongoing ramifications of the event and the subsequent “war on terror”. Indian-American director Mira Nair’s film The Reluctant Fundamentalist (2012), based on Mohsin Hamid’s Booker-nominated novel of the same title, takes on the racial and ethnic stereotyping found in films like American Sniper. Riz Ahmed plays Changez, a young Pakistani in the US who goes from ruthless corporate climber to disillusioned and excluded immigrant throughout the film.

The attack on the World Trade Center is one of the most significant events of the 21st century. So much so that it is used as a generational marker, distinguishing millennials from Generation Z in terms of whether or not one remembers the event directly.

Perhaps it’s appropriate, then, that even the Marvel Cinematic Universe, with its predominantly youthful viewership, has allegorically hinted at the failures of the “war on terror”. Its most recent television spin-off, Loki (2021), appears to question the validity of some of the language that surrounded 9/11 and what started out as “Operation Enduring Freedom”. On the afternoon of 9/11, George W. Bush stated that “freedom itself was attacked this morning” – Loki challenges the very notion of liberation, saying “the first and most oppressive lie ever uttered was the song of freedom”.

And now as the world witnesses the takeover of Afghanistan by the Taliban within days of the US and British troop withdrawal, it remains to be seen how Hollywood will treat not only 9/11, but its ongoing ramifications – which even the Hollywood dream machine may struggle to spin into a spectacle of freedom and victory.

This article was co-written by Michael C. Frank, Professor of English-Language Literatures of the Nineteenth and Twentieth centuries, University of Zurich