An event documenting the cultural heritage of Syrians currently residing in the UK took place at the Museum of Liverpool earlier this month.

The event was the culmination of the Intangible Cultural Heritage research project, a partnership between the University of Liverpool and the Syrian-British Cultural Centre.

Organiser Dr Ataa Alsalloum, Lecturer in Architecture and Urban Heritage at the University, said: “This project has charted the role of shared intangible cultural heritage (ICH) traditions as a strong driver for post-conflict reconciliation in exile. Awakening public interest in Syrian ICH and its importance through actual involvement of communities and the heritage bearers has not been attempted before, and the project has provided a platform for these voices.

“The Museum of Liverpool provided the perfect venue for the project’s dissemination, as well as an opportunity to welcome Syrians to Liverpool’s community and introducing them to the city’s history. The partnership between the University of Liverpool and the Syrian-British Cultural Centre has initiated a robust pathway for impact.”

The project and event aimed to raise awareness of the value of such a heritage, to contribute to safeguarding it and to assist the process of socio-cultural cohesion and post-conflict reconciliation.

Event attendees explored Syrian customs, traditions and knowledge and heard some of the untold stories of Syrians in the UK. The event started with a public performance in the Museum’s atrium of Arāḍah shamia – a type of chanting and dancing to initiate a joyful event, mainly performed in Damascus. The chanting was unique to the occasion, referencing the seven gates of Old Damascus and thanking the University of Liverpool.

Attendees also enjoyed a screening of a documentary narrated by Dr Alsalloum, recorded and directed by the School of Architecture’s Monika Koeck, showcasing the project’s activities. The film also featured successful stories told by several displaced Syrians in the UK, who have been successful in establishing a new life, a new career and even new hobbies, which are inspired by their inherited traditions.

To bring the story to life, six young girls performed a traditional Samaḥ dance, most often performed in Old Aleppo. A group of young men performed Dabkah dance, which is publicly practised on joyful occasions in many parts in Syria, and were joined by Dr Alsalloum.

Watch a video of the event here:

One of the event’s attendees said: “The event really was so engaging and informative. It gave me as a UK citizen a real idea of how it must be to have to leave your home and culture. I found the event immersive and moving.” 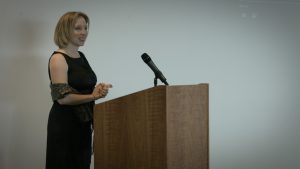 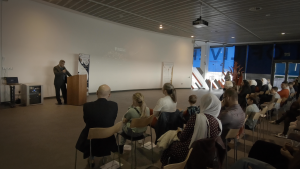 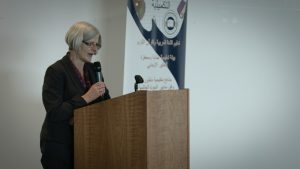 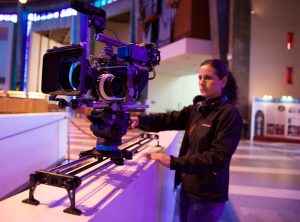 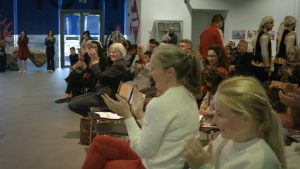 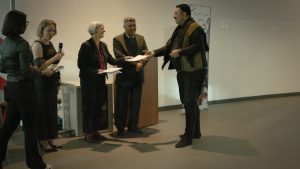 Arāḍah performance at the end of the event