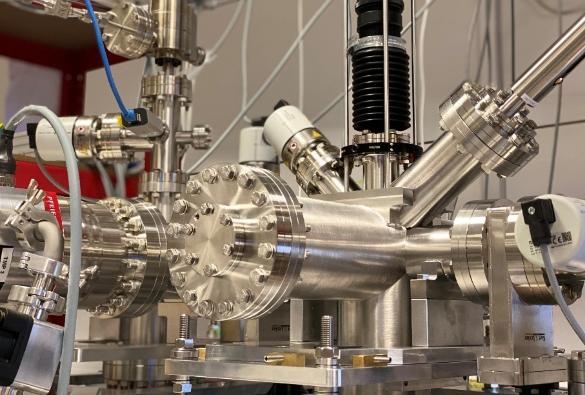 Proton beam cancer therapy is a complex procedure that relies upon knowledge of the detailed beam properties to ensure effective dose delivery to the patient. Clinical settings currently use interceptive ionization chambers which require daily calibration and suffer from slow response times. With new and emerging treatment techniques using ultra high dose rates, there is a demand for the development of novel beam monitors, which are fast, non-invasive and calibration-free.

As part of new project called JetDose, particle accelerator experts will carry out a cutting-edge research program into a novel monitor that will enable non-invasive in-vivo beam dosimetry in hadron beam cancer therapy. The project is led by Professor Carsten P Welsch, leader of the QUASAR Group based at the Cockcroft Institute, and is supported by a £300k award from STFC’s Challenge Led Applied Systems Programme (CLASP).

Current methods to carry out beam characterisation require multiple systems each imparting a slight disturbance to the particle beam as it passes by. This disturbance can alter the intended transverse dose profile of the beam, ultimately creating slight deviations from a patient’s treatment plan. Quality assurance methods are mostly disruptive measurements and do not allow treatment to take place at all whilst they are being conducted. JetDose will develop a new in-vivo dosimetry system based on the re-application of technologies pioneered by the QUASAR Group.

The underpinning technology was originally developed for use with low energy antiproton beams and most recently adapted for gas jet profiling for the high luminosity upgrade of the Large Hadron Collider at CERN. In this system, a supersonic gas jet is fired across the high intensity proton beam at the LHC. The gas molecules have little-to-no effect on the proton beam, however the proton beam excites the gas molecules; this excitation can be imaged, which is turn provides a complete non-invasive two-dimensional profile image of the proton beam.

JetDose will redirect this technology at the medical accelerator sector, by optimising it for the different challenges found in a treatment facility. The non-invasive means of producing a profile image will allow the monitor to be run online alongside treatment operation. As the intensity in the images directly depends upon the beam intensity, and therefore the dose, an image collected with this system provides an in-vivo dose map of the beam being delivered to the patient.

Professor Welsch said: “JetDose will produce a novel monitoring system which addresses the growing need for in-vivo dosimetry in medical facilities across the world. This technology also shows good promise for application at other high intensity, high energy particle accelerators and this wider market will be assessed as part of the business plan that will be developed. The project marks an important step in the physics department’s impact strategy.”

Jason Green, Associate Director for External Innovations, said: “The CLASP fund was designed to take STFC technology and apply it to solve some of society’s greatest challenges. This fund empowers scientists to utilise their skills and expertise to create real-world impact. The projects funded in this round take technology first created to understand the fundamental questions in science, to create novel solutions for challenges such as cancer treatment and medical diagnostics.”

The JetDose project will involve close collaboration with the Liverpool spin-out company D-Beam Ltd, an STFC CERN Business Incubation Centre alumnus; experts from the Clatterbridge Cancer Centre (CCC), one of the UK’s leading cancer care centres; Fondazione CNAO, a cutting edge hadron therapy facility in Italy; and leading OEM treatment facility manufacturer IBA in Belgium. It is a direct result from the successful research collaboration within the Liverpool-led OMA network.