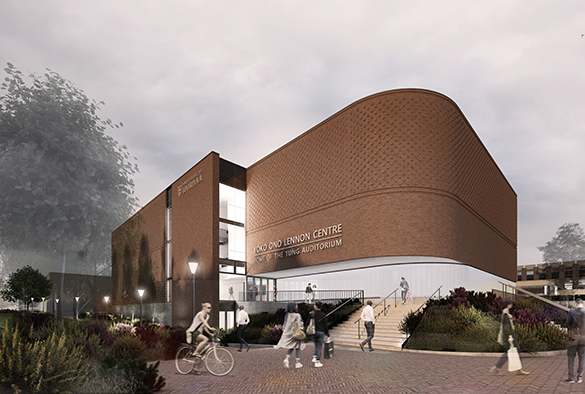 The donation was given by Universal Music UK in honour of Yoko Ono Lennon.

With the hoardings around the construction site on the corner of Grove Street and Oxford Street now removed, the brand new, state of the art, facility is starting to emerge, ahead of its official opening in March 2022.

“As well as providing educational resources, the Yoko Ono Lennon Centre will be the home of The Tung Auditorium – a 400-seat acoustically optimised, flexible, music performance space, capable of facilitating chamber music, vocal groups, electro-acoustic and multi-media work, or an up to a 70-piece orchestra.

Universal Music, like Liverpool, enjoys strong links to The Beatles and is the home to the band’s full back catalogue as well as the solo recordings of John Lennon, George Harrison and Ringo Starr.

Adam Barker, Director of Business Affairs, Universal Music UK said: “The Yoko Ono Lennon Centre will not only support generations of creatives for many years to come, it will also make a huge contribution to Liverpool’s already rich cultural tapestry.

“We’re delighted to be supporting the University of Liverpool in this campaign and can’t wait for the doors to open.”

This year also marks the 30th anniversary of the John Lennon Memorial Scholarships, established in 1991 by Yoko Ono Lennon, to provide disadvantaged students with the opportunity to realise their ambition by studying at the University.

“And this month, the University’s MA Beatles, Music Industry and Heritage – the only course of its kind in the world – received its first cohort of students.

“It will enable music students to learn and perform in a world-class venue and will become an important part of the University’s – and the city’s – musical-cultural landscape.”

For more information on the Yoko Ono Lennon Centre, and The Tung Auditorium, please visit: www.liverpool.ac.uk/yoko/