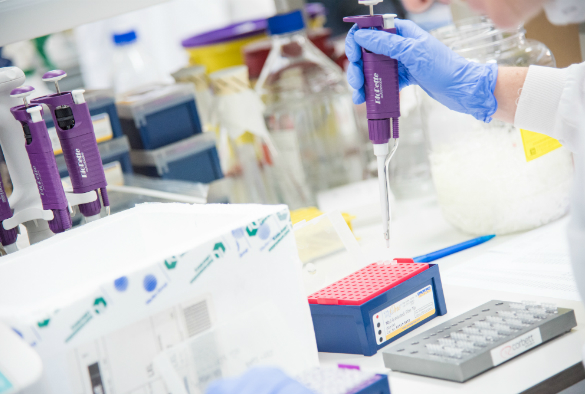 The University of Liverpool is leading a new international research collaboration to accelerate the development of much needed antibiotics for cystic fibrosis (CF) lung infections.

Supported by £750,000 of funding from the Cystic Fibrosis Trust and the CF Foundation in the United States, the Strategic Research Centre will develop new laboratory methods to make it quicker and easier for researchers to test new medicines for CF.

Most people with CF will develop lung infections throughout their lifetimes. Once the bugs that cause the infections adapt to the environment of CF lungs they can be extremely difficult to treat. In some cases, the bugs are becoming resistant to the strongest medicines that are available. Left untreated, these infections can trigger permanent lung damage, meaning people are more breathless and have less energy to do day-to-day activities. More effective treatments with fewer side effects are urgently needed.

Researchers around the world are currently working on the development of new medicines to treat CF lung infections. However, there are differences and gaps in how different researchers test new CF medicines in the laboratory meaning that the results are not comparable, which slows down progress.

In addition, the tests that are used were not originally designed specifically to test CF medicines. For example, the tests don’t mimic the effects of the thick sticky mucus found in the lungs of people with CF. This makes it hard to assess whether a potential medicine will work.

The new four-year Strategic Research Centre (SRC) led by Dr Jo Fothergill at the University of Liverpool will develop a new set of laboratory methods specifically designed for testing new medicines for CF.

Alongside researchers from across the UK, Canada and USA, the SRC will be supported by a wide range of collaborators. Dr Fothergill, a Senior Lecturer in the Institute of Infection, Veterinary and Ecological Sciences, said: “We want colleagues to feel that our tests are useful and valid to support the development of new CF antibiotics. Most of all, we want people to use them.

“To achieve this we have the support of over 30 different collaborators, ranging from university professors, biotech companies, research funders and regulators, to ensure these tests are the best they can be.”

The SRC is also being supported by the CF AMR Syndicate, a partnership between the Cystic Fibrosis Trust and Medicines Discovery Catapult that was created to find ways to speed up the development of new therapies for CF infections.

Dr Paula Sommer, Head of Research at the Cystic Fibrosis Trust said: “This Strategic Research Centre is a great illustration of the power of collaboration in working to solve problems in CF infection drug development.”