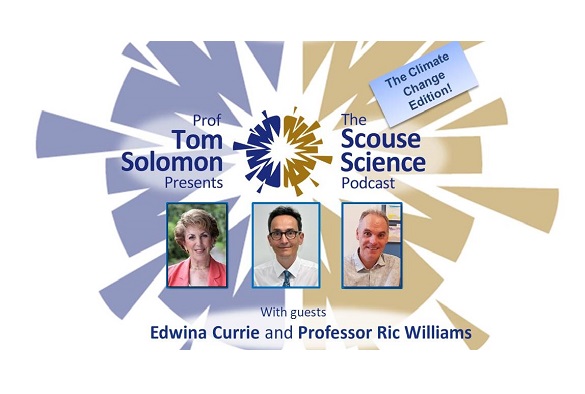 In a Climate Change edition, former Conservative MP, Edwina Currie, and University of Liverpool’s Professor Ric Williams, will be guests for the next episode of Scouse Science, on Tuesday. 9 November, 1pm – 2pm.

In recognition of the UN Climate Change Conference, COP26, this month’s episode will focus on climate change.

Liverpool born Edwina Currie served as MP for South Derbyshire from 1983 until 1997, and spent two years as a Junior Health Minister. She is a novelist and broadcaster who even took a turn in the jungle on ITV’s “I’m a Celebrity – Get Me Out of Here!”.

Professor Tom Solomon is Director of the UK’s Emerging Infections Research Unit based as the University of Liverpool, is on the NHS front line at the Walton Neuro Centre and Royal Liverpool University Hospital, and appears regularly on television and radio discussing science. You can follow him @RunningMadProf on Twitter.

Holly Ellis really is a Scouse Scientist. Having studied undergraduate Biological Sciences at Oxford University, she’s now a Clinical Scientist in Genomics with the NHS. You can follow her @ScientistScouse on Twitter, and find original content on her YouTube channel, The Scouse Scientist.

If you enjoyed the last podcast and would like to share it, here is the webpage with links to all previous podcasts. Alternatively you can catch up on all previous programmes by going to your podcast provider and searching for ‘Scouse Science Podcast’ where you can rate, review and subscribe.