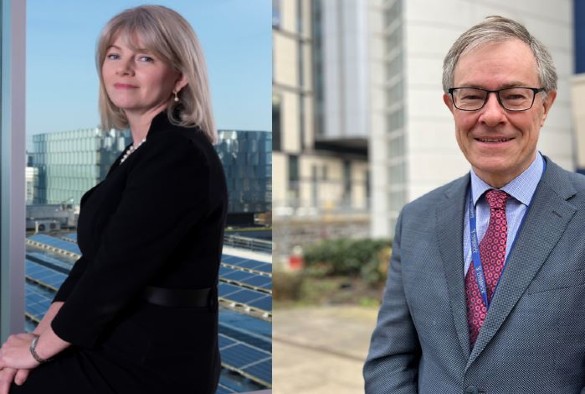 Two Professors from the University of Liverpool have been recognised in the 2022 New Year Honours list.

Professor Louise Kenny has been awarded a CBE for services to research in the NHS.

Louise, who is the Executive Pro-Vice-Chancellor of the Faculty of Health and Life Sciences and Deputy Chair of the Board of Liverpool Health Partners, said:
“I am delighted to be recognised in the New Year Honours. As an NHS trained doctor, I’ve witnessed first-hand the power of research to transform healthcare and save lives. As a scientist, I know that research is a team sport and so I wish to acknowledge and sincerely thank my outstanding colleagues at the University of Liverpool and at all our NHS partner Trusts, especially the Liverpool Women’s Hospital. Whilst the pandemic has highlighted that there is still much to be done, nationally and globally, to ensure equal access to medical innovation, it has also highlighted what we can achieve together. I’m humbled to be honoured and proud of the collaborative effort that underpins this nomination.”

Louise was the founding Director of the Science Foundation Ireland (SFI)-funded Irish Centre for Fetal and Neonatal Translational Research (INFANT) and was Professor of Obstetrics and Gynaecology at Cork University Maternity Hospital where she worked as a Consultant Obstetrician and Gynaecologist from 2006-2018.

Louise has a longstanding clinical and research interest in hypertensive disorders of pregnancy. Her research group is supported by more than £25million of peer reviewed funding and her work has resulted in more than 200 peer reviewed original papers, reviews and book chapters. Louise has received numerous awards for her work, most recently the prestigious title of Researcher of the Year by SFI (2015) and 2015 Irish Tatler magazine Woman of the Year Award for STEM.

Professor Dame Janet Beer, Vice-Chancellor of the University of Liverpool said: “I know I speak for the entire University community in offering the warmest of congratulations to Professor Louise Kenny for the award of CBE for services to research in the NHS. I also feel emboldened to applaud this honour on behalf of the Liverpool City Region for the tireless work she led during the Pandemic to build a collaborative clinical research framework to ensure that the health, economic and societal outcomes for the people of the Region can be improved, even in the most challenging of times. However, and perhaps even more significantly, I would like to congratulate her on behalf of families everywhere for her world leading work in Maternal and Foetal Medicine. As a clinician, a scientist, a researcher, academic leader and I know she would want this to be included, mother, we celebrate, today, the outstanding achievements of Professor Louise Kenny.”

The University’s Chair Professor of Clinical Ophthalmology and Head of the Department of Eye & Vision Science Professor Simon Harding was also recognised, with an MBE for services for the prevention of blindness.

A Consultant Ophthalmologist at Liverpool University Hospitals NHS Foundation Trust, Professor Harding has worked at the Trust’s leading St Paul’s Eye Unit since 1981, and over the last 30 years has been instrumental in a number of significant research and clinical breakthroughs for patients who require specialist eye care.

Professor Harding said: “I’m absolutely thrilled to receive an MBE. It’s been an honour to support patients by introducing pioneering treatments based on cutting-edge research. This not only benefits our patients here in Liverpool but also around the world. For me it hasn’t really been a job but a passion, and to be recognised in this way is truly remarkable.

“I wouldn’t have been able to do my work without the tremendous support of an incredible team of friends and colleagues. And of course, the research I’ve led couldn’t have happened without the thousands of people who have volunteered to join our research studies.”

Sir David Dalton, Interim Chief Executive of Liverpool University Hospitals, said: “Congratulations to Professor Harding on receiving his MBE in the 2022 Queen’s New Year’s Honour List. His brilliant work supporting our ophthalmology patients here at the Trust, as well as nationally and internationally, is truly deserving of this honour.”