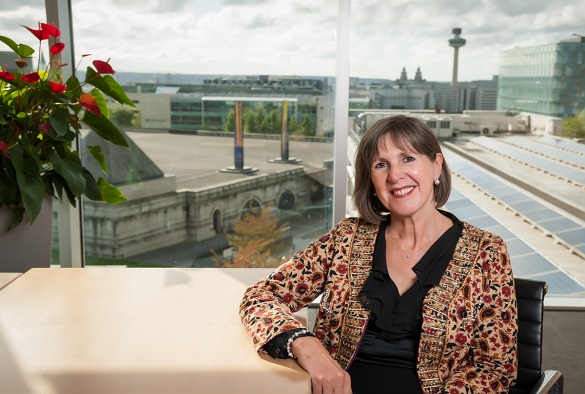 Professor Dame Janet Beer, Vice-Chancellor of the University of Liverpool, has today announced that she will be retiring from her role in December 2022. An outstanding researcher in the field of late 19th and early 20th century American literature and culture, and an established leader in the higher education sector nationally, Professor Beer joined the University in February 2015 as its first woman Vice-Chancellor.

Under her leadership, the University has made enormous progress in the representation of women at senior levels in the organisation. 64% of the University’s Senior Leadership Team and 44% of senior leaders are now women and all academic schools and institutes have an Athena Swan award. Professor Beer has also overseen significant improvement in the University of Liverpool’s work to widen student participation, working in partnership with schools and colleges to provide opportunities to huge numbers of young people from traditionally under-represented groups and low participation neighbourhoods.

Paying tribute to Professor Beer’s leadership, President of the University of Liverpool’s Council, Carmel Booth said: “Janet has delivered outstanding leadership during her time at Liverpool, overseeing significant improvements in student experience and the physical transformation of our campus. She has spearheaded a sector-leading approach to sustainability and civic initiatives and world-class research which is making a tangible difference to people’s lives. Most recently, she has led the University in exemplary fashion throughout the pandemic. Janet will be sorely missed by all, but the enormous contribution she has made as Vice-Chancellor will continue to advance and improve our position as a research-intensive university and an anchor institution in the Liverpool city region. Importantly, she has given her successor a strong and solid foundation on which to build.”

Professor Dame Janet Beer said: “I am extremely proud of the progress we have made as a University during my time as Vice-Chancellor. One of the University of Liverpool’s most distinctive features is in partnership working and I have endeavoured to make it real in every dimension of our activity. We have all contributed to the transformation of our relationship with the Liverpool City Region over the last few years to ensure that we fulfil our civic mission to serve the local community, making a substantial economic, social, health, employment and cultural contribution. Throughout the course of the pandemic it has been demonstrated, time and time again, that we must work collectively to tackle the challenges that face us – locally, nationally and internationally – and universities like ours have a leading role to play.“

The process to appoint a new Vice-Chancellor for the University of Liverpool will now commence and the intention is that an appointment will be made with ample time to ensure a smooth transition. The appointment panel will be led by the President of the University Council and other University representatives and head-hunters have been appointed to lead the international search.