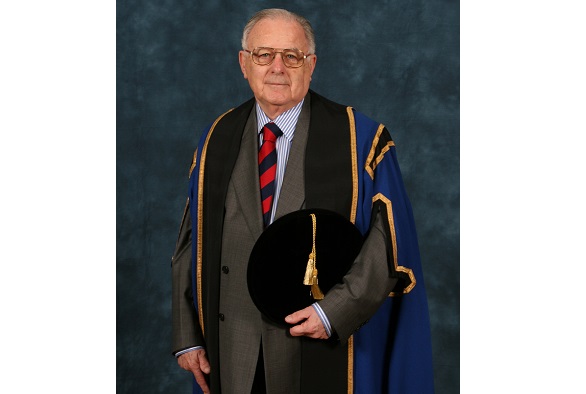 The University is saddened to learn of the passing of former University Pro-Chancellor Professor James Keaton MBE.

Professor Keaton spent the majority of his career at Imperial Chemical Industries (ICI). Over the course of his 22 years with the company, he held numerous senior positions, including Director of ICI Organics Division, Chairman of ICI Dyestuffs and Board Member for ICI in the UK, Brazil, Hong Kong, China and Japan.

In the 2011-12 Honours List, Professor Keaton was awarded an MBE for his services to heritage in the North West. Professor Keaton was Chairman of the North West Regional Board of the National Trust and Chairman of the Board of Governors of Upton Hall Grammar School on the Wirral. He was also a Freeman of the City of London, an ambassador for Wirral Hospice St John’s, and a Regent of Liverpool Hope University. He received an Hon LLD from Manchester University in 2000 and an Honorary Degree from Liverpool Hope in 2017.

“During his years on the University Council and successively as Vice-President, Treasurer and Pro-Chancellor, Jim Keaton gave sterling service to the University. He was always very friendly and courteous to staff at all levels, but was appropriately challenging when involved in the governance processes of the institution. I remember that he was a regular attender at degree ceremonies, latterly attired in his Liverpool Honorary Doctor of Laws gown. He was also a great champion of the Management School. I recall Jim as always being on the go, a great networker and a supporter of a wide range of organisations, including his old school, St Edward’s College, the National Trust, St John’s Hospice and Liverpool Hope University, to name but a few.  As one appointment came to an end, he would take up another!  I think that he had no wish to take it easy, and I understand that he was active to the end, as he wanted to be.”

Professor Keaton’s funeral is to be held on Friday, 14 January at 9.30am at St Agnes’ Church, West Kirby. Messages of condolence and donations to Wirral Hospice St John’s can be sent through the funeral directors at: https://www.charles-stephens.com/funeral/james-keaton/