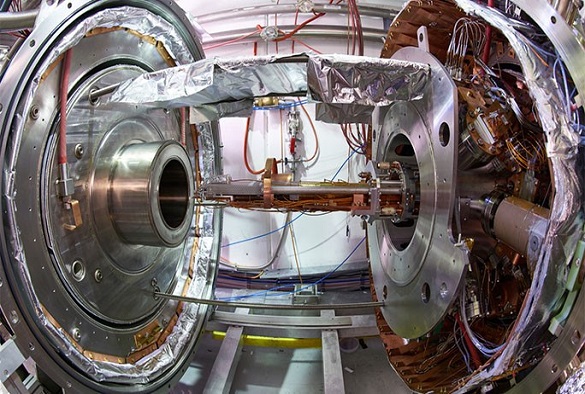 The University of Liverpool has become the first UK university to join the AEgIS antimatter experiment at CERN.

It is understood that matter and antimatter were created equally in the Big Bang, and when they meet, they annihilate each other.  However, we live in a universe dominated by matter. Physicists in CERN’s Antimatter Factory are creating small quantities of antimatter and conducting a range of experiments to learn more about its properties and answer the question ‘what happened to the antimatter?’.

AEgIS is one of the very few experiments that use antiprotons to directly investigate the properties of antimatter by exploiting the charge exchange reaction between cold antiprotons and excited Rydberg-positronium, the bound state of an electron and a positron, in order to generate Rydberg-antihydrogen.

The AEgIS experiment involves physicists from a number of countries in Europe as well as from India. The University of Liverpool is the first UK university to join.

Amongst the research challenges that AEgIS will address over the next few years are the development of next-generation positron/positronium converter targets, the formation and transport of pulsed antihydrogen beams with unprecedented intensity and Stern-Gerlach type experiments on a cold positronium beam.

AEgIS spokesperson Dr Michael Doser said: “I am delighted to welcome Liverpool as a new member in the AEgIS collaboration! We look forward to pushing the limits of low energy antimatter physics with the UK group.”

The University of Liverpool has closely collaborated with CERN on low energy antimatter physics for more than a decade. The University’s Department of Physics has made key contributions to the ALPHA experiment and through the Cockcroft Institute, Liverpool experts have pioneered a number of instrumentation solutions. This includes a cryogenic current comparator for the non-invasive intensity measurement of nA beams, gas jet-based beam profile monitors, as well as novel sensors for the 3D mapping of electrostatic fields in ion traps and beam transport lines.

Moreover, the University of Liverpool has initiated and coordinated the Horizon 2020 “Accelerators Validating Antimatter physics” (AVA) network between 2016 and 2021. This was the largest-ever research and training network on low energy antimatter physics and included a Fellow based in AEgIS.

Professor Carsten P Welsch, Head of the University of Liverpool’s Physics Department, said: “We are excited to be a member of the AEgIS collaboration and the first UK University to join this experiment. We have been working with the collaboration for many years – initially on studies into new beam monitors and later within the framework of the pan-European AVA project. The experiment offers excellent prospects for ground-breaking research and we look forward to being part of this international team.”

The University of Liverpool’s antimatter research at CERN’s Antimatter Factory is funded through the Engineering and Physical Sciences Research Council. UK access to CERN is made possible through its subscription, delivered and managed by the Science and Technology Facilities Council (STFC).

In addition, research into low energy antimatter facility design and optimisation, including the development of novel sensors and instrumentation, is supported by STFC through its funding of the Cockcroft Institute.