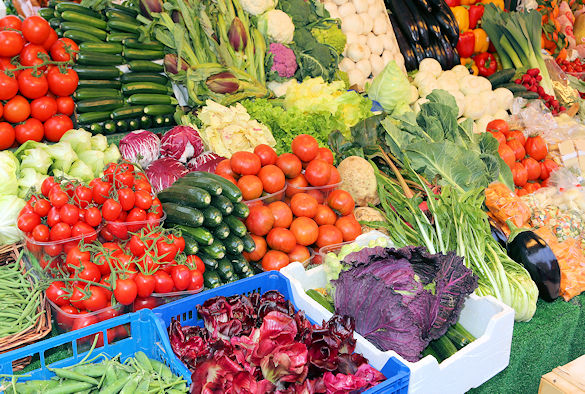 Britain’s towns and cities have the potential to support an urban agricultural revolution that would help meet the dietary needs of a growing population, boost the nation’s health and wellbeing, as well as reduce reliance on imports, a new study published in the journal Environmental Research reveals.

In the first national-level study of its kind, a team of researchers from the University of Liverpool, Lancaster and Cranfield Universities set out to discover if there is sufficient green space, such as private gardens, parks and other recreational areas, within our towns and cities to grow enough fresh food to feed local populations.

The UK relies heavily on imports to meet its demand for fresh food, with more than a third of food coming from overseas. This can leave the nation exposed to disruptions in supply chains, such as those recently experienced with Brexit and Covid-19, leaving some shelves empty. And climate change presents another rising threat to these supplies, as much of our fresh fruit and veg comes from drought-prone regions.

Private gardens and amenity space, such as landscaping and lawns, makes up most urban green space, followed by parks and other recreational areas such as sports fields. Currently only around 1% of urban green space is taken up by allotments dedicated for food production. The researchers considered all urban green spaces as potentially suitable for agriculture.

The study found if all urban green spaces were converted to food production, and used efficiently, they would collectively have the capacity to support food output eight times that of the current UK fruit and vegetable production. However, the researchers recognise that this is at the ‘extreme upper limit’ and that achievable outputs would be lower due to factors such as: some green spaces not being desirable or available for conversion, the level of available skills and knowledge, resources and variable growing conditions.

“These estimates are at the extreme upper limit for growing in British towns and cities,” said Dr Lael Walsh, lead author for the study and researcher with the Rurban Revolution project at Lancaster University. “However, even if only a small percentage of this area is suitable and available for urban agriculture, it could still represent a significant contribution to national supplies of fresh fruit and veg.

Co-author Dr Charlotte Hardman from the University of Liverpool’s Department of Psychology said “We found that urban green spaces are significantly under-used for food growing and that there is huge untapped capacity in our towns and cities for people to grow more given support through targeted national policies. This could prove to be beneficial for improving access to healthier foods as well as boosting wellbeing through better connectedness to nature.”

Professor Jess Davies from Lancaster University, Principal Investigator of the study, said: “Britain is a densely-populated country that is highly reliant on imported fresh fruit and vegetables, and meeting the dietary needs of a growing urban population in a sustainable manner is a significant challenge. Finding ways in which Britain could increase food self-sufficiency is of increasing importance for securing our future food supply.

“Urban agriculture and more people ‘growing their own’ could play an important role in reducing our reliance on imports, and bolster resilience against disruptions in supply, without converting areas of nature to agriculture, or further intensifying farming. But it was not clear what the extent of that role could be at a national scale, until now.”

The study also looked at 26 urban conurbations of differing sizes across England, Scotland and Wales, including Liverpool, and revealed that all those towns and cities analysed had the potential to meet the fresh fruit and vegetable dietary needs of their local populations.

Dr Beth Mead, University of Liverpool co-author and research fellow on Rurban Revolution added “Based on World Health Organisation guidelines, individuals need 400g of fruit and vegetables a day – which equates to 146kg a year. Our assessment found that conversion of urban green spaces to food production could, at the higher end, produce 281kg of fruit and vegetables per person each year”.

If urban agriculture is to expand the researchers recommend:

The findings are published in the paper ‘Potential of urban green spaces for supporting horticultural production: a national scale analysis’, which can be found here.