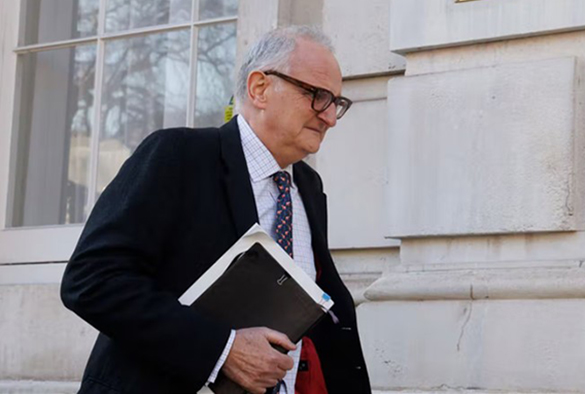 Conservative Treasury minister and Cabinet Office minister Lord Agnew has resigned from both of his posts with a scathing rebuke to his government colleagues over COVID business loan fraud. His dramatic exit from the chamber was an unusual occurrence in the normally sedate House of Lords, which rarely sees ministerial resignations.

Lord Agnew’s resignation stems from his dissatisfaction with how the Bounce Back Loan Scheme has been handled by government, the British Business Bank, and lenders – namely, the main high street banks. He called the government’s oversight of the scheme “desperately inadequate … and nothing less than woeful”.

The scheme was launched in May 2020 as part of the government’s package of support for businesses during the early days of the pandemic. Over an 11-month period, 1.5 million loans lent a total of £47 billion to (supposedly) eligible businesses. But after the close of the scheme in March 2021, it was disclosed that billions of pounds worth of loans might not be paid back.

Estimates on default levels vary. A House of Commons committee in June of that year projected that defaults on loans could total £27 billion. And in December, the National Audit Office projected £17 billion.

While most of the written-off debt may be from those genuinely unable to repay, a not-insignificant chunk is due to fraud. Agnew accused the government of giving loans to hundreds of companies that were not trading at the time. In March 2021, the department for Business, Energy and Industrial Strategy put the potential bad debt figure due to fraud at £4.9 billion.

No 10’s response to Lord Agnew’s resignation was that the government has recovered £500 million so far, with the expectation of recovering an additional £1 billion. But against these default figures, that recovery rate will be infuriatingly low for hard-pressed taxpayers.

The government’s challenge is that lenders have a 100% state guarantee for any nonpayment of bounce back loans. Bank loans are not normally underwritten by the state. This guarantee explains why banks may have lent without adequate safeguards and why the default projections are so high. Rishi Sunak, as chancellor, will need to revisit the terms of the state guarantee to ensure lenders acted within the scheme criteria, if he is to limit the amount of guarantees the Treasury will need to pay.

The government has powerful tools at its disposal both to try and recover loans that are not paid back and to punish wrongdoing, though some loans may be lost forever due to a lack of resources.

There are civil sanctions that might worry a director whose company is in default. Director disqualification exists to protect the public from directors who have behaved in an unfit way, such as by dissolving their company to evade debts or inappropriately using loan funds. As part of this regime, the government’s Insolvency Service can also ask the courts to order directors to pay compensation from their own pocket.

In January 2022 the Insolvency Service successfully obtained disqualification orders totalling 21 years against Yorkshire-based businessmen who abused the loan scheme by fraudulently inflating the company’s turnover and making payments from company funds to relatives. Compensation orders may follow for the directors, and those in bankruptcy may also have the relevant restrictions extended beyond the usual 12 months so that they can’t, for example, obtain credit for a longer period.

In another recent case, the Insolvency Service obtained director disqualifications against three directors who had inappropriately used £100,000 of bounce back loans to make payments to specific creditors. Once disqualified, an individual cannot act as a company director from anywhere between two and 15 years, depending on what the court says.

There are also potential criminal sanctions for company directors, particularly where fraud or other offences can be established. Law enforcement agencies including the National Crime Agency and the National Investigation Service are already investigating the most egregious fraud cases.

In one headline case, leaders of an organised crime group successfully applied for loans. In another, two men have been jailed for a total of 33 years for their part in a £70 million international money laundering network, £10 million of which was claimed through the loan scheme.

Further arrests for fraud and money laundering offences relating to the scheme have occurred in London, Yorkshire, Humberside, Wiltshire, and Heathrow Airport, where the provision of false information to obtain loans led to an arrest for alleged money laundering and fraud. The cases are yet to come to trial but the defendants can expect long sentences if convicted.

The uproar over the results of the bounce back loan scheme raises one important question – who is responsible? Evidence suggests that banks lent too generously, or with inadequate checks, safe in the knowledge that they were covered by the state guarantee if debtor companies defaulted. Responsibility also sits with company directors who made highly dubious loan applications. Deliberately taking out bounce back loans with no intention of repayment is ultimately a fraud on the taxpayer.

We have to be careful to distinguish between this type of unfit director and those who applied for support in the honest belief that it would help their company survive through this difficult and unprecedented time period, but were ultimately unable to repay the loan.

Unfortunately, the size of the default rate, and the convictions that are starting to emerge, paint a picture of widespread misuse of the scheme. Lord Agnew’s resignation may add further impetus to taxpayer and creditor recoveries.