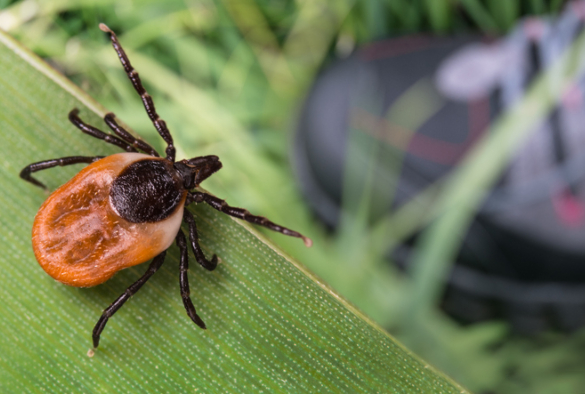 A new £2 million project will determine whether climate change and woodland expansion are likely to increase tick-borne infections such as Lyme disease in the UK.

The new research will involve scientists at the University of Liverpool, the UK Centre for Ecology & Hydrology (UKCEH), the University of Glasgow and the UK Health and Security Agency. It is being funded by the Natural Environment Research Council (NERC), part of UK Research and Innovation.

Diseases caused by tick bites, if untreated, can sometimes cause serious illnesses and be potentially fatal for people and animals. The new four-year project, ‘TickSolve’ will investigate the ecological conditions that enable tick-borne infections to spread, identify areas of the UK where the health risks are likely to be highest and put forward possible solutions.

Dr Beth Purse of UKCEH, principal investigator of TickSolve, says: “Risks from tick-borne diseases are rising across Europe, due to increases in woodland cover and deer numbers, as well as climate change. Throughout the UK, risks could be exacerbated by plans to expand woodland.”

“To tackle the problem, we need to better understand why people are more likely to get bitten by ticks in certain woodlands and whether this risk can be reduced through land management, for example by introducing vegetation or fences that reduce deer movement or tick numbers.”

The research will focus on three tick-borne diseases that pose a current or potential risk to the UK:

Dr Caroline Millins of the University of Liverpool, a co-investigator of TickSolve, says: “Our project will produce ‘risk maps’ to show in which areas of the UK are likely to be at the greatest risk from tick-borne infections. We will also predict how changes in woodland area, climate and patterns of bird migration may alter future risks from ticks and diseases.”

Dr Jolyon Medlock, Head of Medical Entomology at the UK Health Security Agency, adds: “By working alongside stakeholders and policymakers from the start of this project, we will jointly develop proposed interventions to minimise current and future tick-borne disease risks that are locally appropriate. This work will provide evidence for developing environmental management strategies that will maximise benefits to biodiversity and human wellbeing while minimising the risks from current and future tick-borne diseases.”

The success of the project requires bringing together expertise from different disciplines. Professor Roman Biek of the University of Glasgow explains: “A unique feature of the TickSolve project is the combination of scientific approaches it will combine and integrate, including animal surveys, genetic analyses, climate data, computer modelling and social science.”