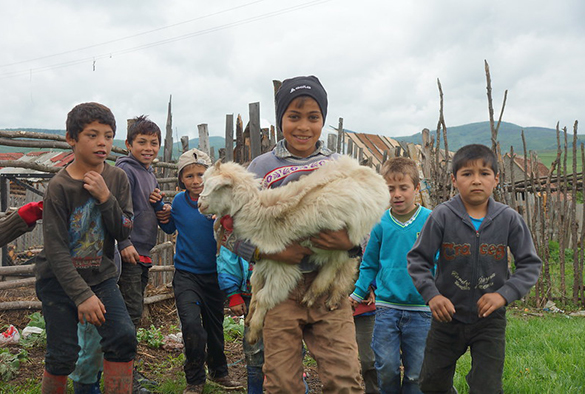 The furore regarding Jimmy Carr’s ‘edgy’ joke about Romany Gypsy peoples and the Holocaust highlights our concern, and confusion, around the relationship between large-scale acts of violence towards minority ethnic groups and the small daily erosion of rights. Such marginalisation begins and has significant impact during childhood, and as such, calls for recognition of a children’s rights approach to cultural protection.

Condemnation has come from a range of sources, including government ministers and spokespersons, sparking calls of increased regulation of streaming platforms, welcomed by broadcast regulator Ofcom.  Such criticism has diverted attention away from government and institutional activity relating to the broad spectrum of settled and mobile Romany Gypsy, Roma, and Travelling communities (GRT).

Gradual changes in legislation have eroded GRT rights to live as nomadic groups. Following the Criminal Justice and Public Order Act 1994 (section 80) local authorities are no longer under obligation to provide locations for travelling communities to stay in personal mobile accommodation. Given the decreasing number of travelling sites the Police, Crime and Sentencing Bill 2021-22 will place an additional burden on travelling communities with increased criminalisation of the use, or suspected intent to use unauthorised land, with more powers to issue fines and seize vehicles (homes) and property.[1]

Increased broadcast regulation may do little to protect GRT communities from problematic programming or content.  Legal challenge against Ofcom’s procedural handling of complaints that Channel 4 programming caused particular harm to GRT children and young people through negative racial stereotyping was dismissed in 2015. In 2021 Ofcom were accused of  institutional racism after a failure to uphold thousands of complaints concerning Dispatches programme ‘The Truth about Traveller Crime’.

Broadcasters and their regulators are not alone in the need to increase recognition of contexts which are or have been harmful for ethnic minorities. The Good Law Project has recently filed for judicial review of a coroner’s decision in relation to the death of Dylan Lee, a young Romany Gypsy man who died by suicide. The refusal to explore repeat experiences of reported racial harassment at the hands of the local community and a lack of police investigation means that the context of Dylan’s death was omitted from public record. While essential, focus on isolated incidents (as required for legal challenge) hides a broader landscape of structurally permissible discrimination wielded by both institutions and the wider public.

In light of these issues and from the perspective of children’s human rights, there are considerable concerns about the situation of GRT children in the UK. Submissions to the Commission on Race and Ethnic disparities in 2020 outlined four key areas of inequality for Travelling communities: poorer experiences and outcomes in both health and education, accommodation problems (stemming from both a shortage of sites, and from sites with poor access to basic utilities and sanitation), and social exclusion. All of these factors have a cumulative effect on the day-to-day life of GRT children.

All rights contained within the UN Convention on the Rights of the Child (UNCRC) are held by GRT children. They are inseparable and inter-linked – where one right is violated, there can be significant knock-on effects for others. For children from ethnic minority groups Article 30 is critical in obligating states not to deny children from ethnic minority groups the right to enjoy their culture. For children from GRT communities, this should ensure a basic level of protection to develop within and learn from their distinct cultural and linguistic communities (where they choose to do so).

Under the UNCRC states should recognise that GRT children have the right to the highest attainable standards of health (article 24) and a ‘standard of living adequate for the child’s physical, mental, spiritual, moral and social development’ (article 27). One in five mothers from nomadic backgrounds will lose a child in comparison to one in one hundred of the general population. For travelling GRT children access to well-facilitated sites and the security of travelling with community can be beneficial for their mental and physical health.

GRT children have the lowest educational attainment of all ethnic minority groups in the UK, and are more likely to experience permanent or fixed term exclusion from school, as well as being disproportionately overrepresented in the justice system. From a rights perspective education should have the aim to foster understanding and peaceful co-existence between peoples of different ethnicities, religions or nationalities (article 29.1(d)) placing onus on the state to promote cultural understanding in schools. Education should at least recognise the maintenance of cultural practice. Negative encounters with state agencies may mean that GRT families may only experience situations of control rather than support to meet children’s needs. To provide adequate protection for children states should take preventative measures (article 19), and where intervention occurs this should be undertaken in light of the desirability to maintain the child’s cultural background (article 20).

The Committee on the Rights of the Child – the body tasked with monitoring the UK’s compliance with its international children’s rights obligations under the UN Convention on the Rights of the Child (UNCRC) – has repeatedly pointed to  discriminatory practice and social exclusion of GRT children in the UK and most recently to the contributing role of the media (para 21(c)). Observations on state activity in relation to children’s rights also indicate that bullying is a significant and specific form of violence experienced by GRT children (para 48a). GRT Children in the UK have reported hiding their ethnicity where possible to avoid such issues. Children from ethnic minority groups should be afforded the right to be free from discrimination in the realisation of their rights (article 2) and should also have access to a range of media sources which promote their ‘social, spiritual and moral wellbeing’ and has social and cultural benefit (article 17). In particular GRT children’s best interests (article 3) as individuals and members of collective groups should be a primary consideration in all situations which concern them. Critically GRT children also have the right to express their views in all matters which affect them, and these should be given ‘due weight’ in line with their age and maturity. (article 12)

Being reminded of the rights of GRT children in the current landscape of increasing marginalisation allows us to understand the impact on children’s wellbeing and development and how we should begin to approach protecting the rights of distinct cultural groups. Jimmy Carr’s stand-up routine is just one symptom of the erosion of respect and security of nomadic and settled GRT children and their communities. Without stopping to view the bigger picture, we risk the increasing slide into more extreme forms of widespread ethnic persecution, potentially including genocide itself.