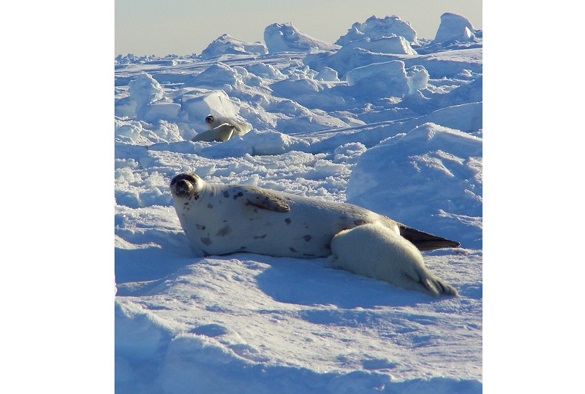 Research by University of Liverpool ocean scientists has found that found that food webs in the Barents Sea have been affected by our changing climate since at least the 1950s.

The study, which involved researchers at the University of Liverpool, the University of St. Andrews, the National Oceanography Centre alongside the Institute of Marine Research in Norway used archives of teeth from harp seals, information on seal migration patterns from telemetry and a global numerical model to provide new insight into how Arctic ecosystems are responding to climate change over decadal timescales.

Harps seals are ice-dependent predators and considered to be excellent indicators of ecosystem health. Collaborators in Norway provided access to archives of teeth from harp seals dating back to the 1950s. Seal teeth are like tree rings, with annual growth layers of dentine being deposited, allowing for an individual’s age to be determined.

Using analytical facilities at the University of Liverpool (LIFER), cutting-edge biomarker analyses of these dentine layers allowed chronological reconstruction of key properties of the Arctic marine ecosystem since the 1950s.

Published in the journal, Global Change Biology, the study used model simulations to reveal that these multi-decadal trends were driven by an increase in anthropogenic nitrogen deposition in the North Atlantic and its subsequent transport into the Arctic alongside an increase in productivity within the Arctic. Ultimately, the results suggest that the Barents Sea ecosystem has been impacted by anthropogenic activities for at least 60 years (since the 1950s), extending beyond the time period accessible from satellites and direct oceanographic observations.

The research was jointly led Dr Camille de la Vega and Dr Pearse Buchanan, who are post-doctoral researchers on the NERC-funded ARISE project.

Dr Camille de la Vega, a researcher on the ARISE project at Liverpool and now based in Germany, said: “Biomarkers are powerful tools for food web analysis and being able to reconstruct food web properties using archives of seal teeth has provided new understanding of how ecosystems are responding at timescales unfathomable by direct observations. We will now extend this study to consider the decadal trend in the trophic position of the seals”.

Dr Pearse Buchanan, PDRA with the ARISE project at the University of Liverpool said: “Our results highlight the connectivity between the Arctic and other ocean basins and demonstrate that we need to look beyond specific ocean regions when considering the impact of climate change on marine ecosystems.”

Dr Rachel Jeffreys, Marine Biologist at the University of Liverpool’s Department of Earth, Ocean and Ecological Sciences, said: ‘Biomarker analysis of harp seal teeth has provided new insight into the impact of environmental change on the Arctic. The analysis in this paper was underpinned by a unique set of previous long-term archive samples only accessible through international collaborations. Now that we have established this new capability at Liverpool, we can now confidently reconstruct past ecosystem dynamics in a whole range of environments exposed to environmental change using archives of biological tissues.”

The ARISE project is a five year research project  supported by the NERC-funded Changing Arctic Ocean Programme and led by Professor Claire Mahaffey from the Department of Earth, Ocean and Ecological Sciences..