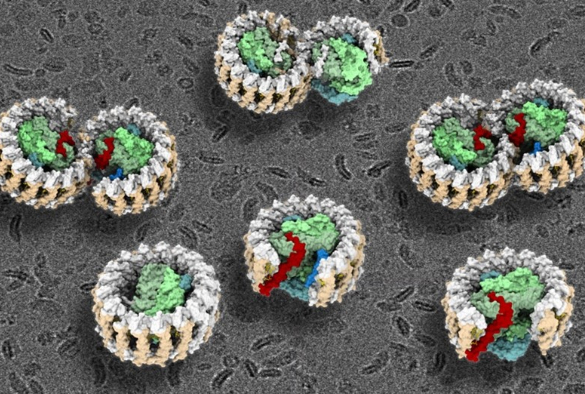 There is still much to learn about the remarkable process of photosynthesis in microbes, but research by University of Liverpool scientists and collaborators provides new insight into the atomic structures and synthesizing mechanisms of key photosynthetic proteins involved in the process.

Purple bacteria are the oldest microorganisms on Earth that can harness the energy of sunlight through photosynthesis. The central photosynthetic component in purple bacteria is known as a RC–LH1 core supercomplex, which is formed by a light-harvesting 1 ring (LH1) surrounding the reaction center (RC), together with numerous associated pigment molecules such as chlorophylls and carotenoids.

The new study reveals a dimeric RC–LH1 structure and several structural variants in R. sphaeroides. This RC–LH1 core dimer has an ‘S-shaped’ LH1 ring with a large opening, which is formed by two extra protein peptides known as PufX and PufY. By genetically ‘deleting’ these peptides, the researchers deciphered that PufX is responsible for binding two monomeric cores together to form the dimer structure, whereas the PufY peptide sites at the opposite side of the opening is important to keep the ‘gate’.

Based on the systematic study of the dimeric structure and its variants, the researchers propose how the photosynthetic core complex is generated and self-organised in nature.

The researchers further used computational approaches to prove that the ‘gates’ in the ‘S-shaped’ LH1 ring provide the channels for the electron carrier molecules called quinones to diffuse across the LH1 barrier, which is fundamental for efficient photosynthetic electron transport.

“This is the first time to study these important photosynthetic protein dimer structures in a systematic manner,” said Professor Luning Liu at the University of Liverpool, who led the research. “This study and our recent work on a monomeric core complex from Rhodobacter veldkampii2 highlight the variable RC–LH1 structures from different origins.”

Professor Liu added: “It is important to unravel how native photosynthetic systems are generated and fulfil functions in cells, as we need to understand, at the molecular level, how photosynthesis is performed and regulated to allow photosynthesizing organisms to grow in their specific niche and how to make our planet colourful and sustainable.”

The research was carried out in collaboration with researchers from Chinese Academy of Sciences, Riken Center for Biosystems Dynamics Research, the University of Tokyo.