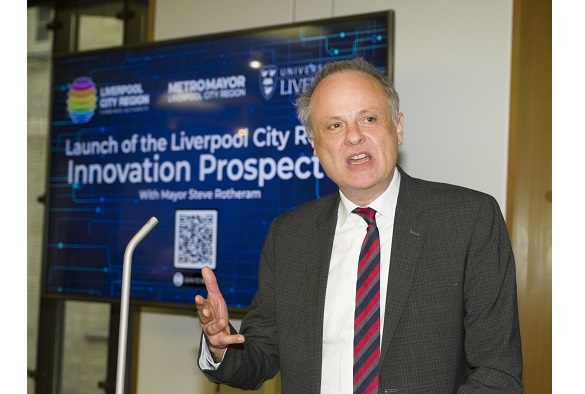 The city region has set the ambitious target of investing 5% of its Gross Value Added (GVA) on Research and Development (R&D) by 2030 – nearly double the government’s UK target. Achieving this would add an estimated £41.7bn to the city region’s economy and create 44,000 jobs. Read more here.

Launched at an event in , a new Innovation Prospectus, featuring some of University of Liverpool’s flagship projects and facilities, details how the city region’s breadth of world-leading expertise in infection control, materials chemistry and artificial intelligence would be a launchpad for future discoveries and investment.

Speaking at the launch event, Professor Anthony Hollander, Pro-Vice-Chancellor for Research and Impact, said: “We were delighted to be invited to support the development of the Liverpool City Region Innovation prospectus and co-sponsor the launch event.

This gives us the opportunity to further showcase and evidence how our research discoveries catalyse innovation and how we are working with the Liverpool City Region Combined Authority (LCRCA) to create ecosystems around our expertise where industry, academia and the public sector innovate together.

Keep up to date with the University of Liverpool’s innovation news by regularly visiting our webpages here.