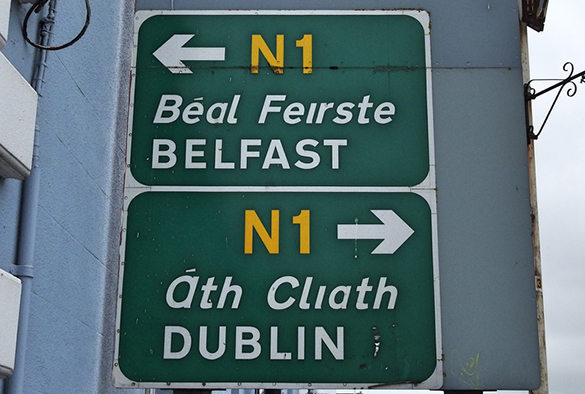 The coverage of the upcoming election has, somewhat wearily, focussed upon the fortunes of the Big Two who seem to be the only parties deemed relevant upon the political stage. It now seems likely that Sinn Fein will emerge as the largest party without electoral growth paralleled by declining DUP fortunes. However, it would not be unexpected if the DUP rally late. In comparing electoral styles the DUP are scrambling while Sinn Fein play it ultra-cool. The former rallying, literally, against unionist apathy and the latter applying a ‘steady as she goes’ policy to not provoke voting elsewhere. All of this is above the surface, predictable and anticipated.

With a 3.1 margin of error parties could be sitting higher or lower than the latest Institute of Irish Studies/Irish News poll predicts. We find Alliance on twice the vote share they gained in 2017. Yet, much of that support sits east of the Bann in constituencies that will be the most frantic sites of contest with results decided by the very slimmest of margins. Ultimately, vote share does not necessarily translate into seats and next weekend will usher forth the twist and turns of political contortionism. Polls are indicative of potential voting and nothing more.

Polls are also about mood and within 3 polls we dug below the surface and found consensus between unionist, nationalist and the ever emerging group who are neither unionist nor nationalist. Regarding legacy communities do not believe that truth will emerge which begs for consideration of alternative ways to deal with the past. A majority support the Executive parties jointly seeking mitigations and easements from the EU regarding the Protocol. Similar levels of support found that 60% of all MLAs voting in agreement was sufficient to demonstrate cross-community support with an even higher share stating that politics is too sectarian. In a sense devolution has worked in terms of an underground silent revolution in which collective interest are fusing a people who seek, to paraphrase Seamus Heaney, hope and society rhyming.

How people vote does not mean they are divided beyond resolution proven by the post Good Friday Agreement period in which the economy has grown, sectarian crime fallen and people are more likely to mix and form relationships across the identity divide. Politics, above the surface, does not recognise this and plays in an opposite direction. It does not avail of the opportunity to speak for a people, unified on much, but presents them as perpetually irritated and aggravated with each other.

The polls and related research pick up on this and other realities. For a sustained period a significant section of the pro-union community is not beholding to the mantra of keeping the other side out. Unionism let these people, largely the socially liberal, slip away to non-voting or voting otherwise. It chose to chase those more determined to maintain traditional ways that included opposing marriage equality and the right of women to control their bodies. Pursuing those out of sync with the majority pro-union community who campaign for and support such rights. Such a process of change is beginning within republicanism and nationalism. Both should be growing due to demographic changes but here we find a quarter of nationalists who will vote Alliance, Green and People Before Profit. The outcome of these shifts will not, initially, be profound but they will gather pace if politics remains shrouded in the past and is not committed to its very own reform. Another dose of collapse, anger, rancour and acrimony that sits awkwardly with consensus for delivery, aspiration and societal progression will weaken the certainty of identity bonds the larger parties imitate.

If next week these parties can grab 20% of first preferences that is as important as who is First Minister. It is an acknowledgment of the slow burner of change and the not needing a meteorologist to tell you which way the wind is blowing.

Voting for small parties is not irrelevant. The Green Party’s Domestic Abuse (Safe Leave) Bill means that victims and survivors of domestic abuse in Northern Ireland will have a legal right to 10 days’ paid leave from work each year. A policy that could potentially save lives and is unique to Northern Ireland. It is this type of delivery that creates not only protection but fulfils the potential to become an inclusive and thoughtful society.

The past 50 years has witnessed voting, fair employment and housing reform. It has been a gruelling project that grinds but it is one that has driven inclusion. The ending of violence unleashed forces that undermined fear and prejudice. This place, whatever you wish to call it, is changing and the forces therein will shape and define a future yet to be contemplated. We are now caught in Maya Angelou’s summation ‘If you don’t like something, change it. If you can’t change it, change your attitude’.

The changes that will define the future are not dramatic, they are not even vivid but they exist and they will eventually mean, for the politics above the surface, that political drama will not necessarily work.

This article was first published in The Irish News, you can read the original article here.