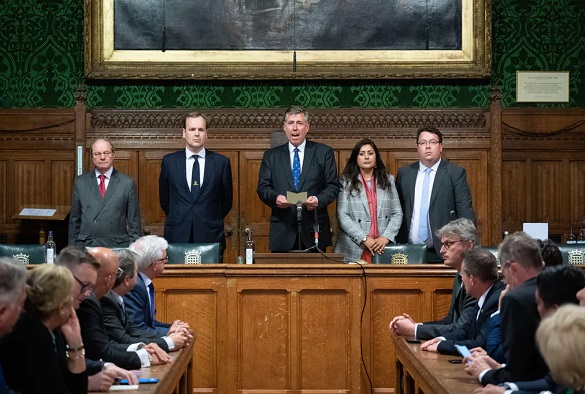 This article by Professor Jon Tonge, from the University’s Department of Politics, was originally published by “The Conversation’:

It would be nice to claim that the near complete accuracy of my prediction of the result of the Conservative Party’s vote of no confidence in Boris Johnson was a glorious triumph of dedicated political science: I predicted that 211 MPs would vote for him to 147 against (the actual number was 148 – I assumed one MP might not vote).

But alas, that would be claiming too much. My forecast involved much guesswork and a fair bit of hunch, combining what the Guardian newspaper has called “Mystic Meg” crystal ball-gazing with mathematical modelling.

Insofar as serious calculations were involved, they involved adding up the number of pledges from Conservative MPs for or against the prime minister and comparing those tallies to Theresa May’s position when she faced a similar vote in December 2018. Of course, many MPs did not declare their intentions, but the basic picture could be ascertained via those who did.

Assessing the loyal or hostile protestations, it was apparent that Johnson would fare worse than his predecessor May had. May had significantly more public pledges of support from her MPs and fewer declarations of opposition. So, the first assumption was that Johnson would not reach her tally of 63% support. The next question was: how low could he go?

It seemed safe to assume that those MPs pledging rebellion would remain true to their word. After all, that is their personal higher risk option. If Johnson did win big they risked permanent banishment on the backbenches, thwarting the vaulting ambition of some. Public affirmations of opposition had to be regarded as the absolute minimum scale of revolt, to which additions would be required.

From early on Monday, it was apparent that the momentum lay with Johnson’s opponents. As increasing numbers declared against him, there was a minor snowballing effect, increasing the confidence of other potential rebels to join in the fun.

By voting time, rebellion seemed a lower-risk move – and possibly even the wiser calculation. If the Johnson premiership was to be damaged beyond recovery, those MPs remaining loyal – or sitting on the fence – could become victims of a purge by a new leader.

Newbies and the payroll vote

Nevertheless, amid the tumult, the prime minister could count on significant sources of backing. In the privacy of the polling both there is no guarantee that the entire “payroll vote” – containing every government member of the House of Commons, from cabinet minister to parliamentary private secretary, will all remain loyal. There are some whose current level of preferment falls short of their own considerable perceptions of their capabilities. They are happy to turn on their leader.

But there are plenty of payroll devotees of the prime minister, grateful to be paid to be in their post. Ridiculously, the payroll vote, at between 160-170 MPs, forms nearly half of the parliamentary party. That, in itself, was nearly enough to get Johnson over the line.

To the bulk of the payroll vote could be added most MPs from the class of 2019 – those 58 Conservatives who captured seats from other parties at the general election, many in the fabled one-time Labour “red wall”. A sizeable number feel indebted to Johnson for what they – and many others – might see as their unlikely victories.

In my own patch of northwest England they form one-third of the entire Conservative representation. Significantly, none came out publicly against their leader. There were exceptions elsewhere – such as the MP for Bishop Auckland, Dehenna Davison – but most stayed loyal.

Adding the payroll vote and the “newbie” vote and then making some deductions gives you the very broad contours of the vote prediction. But the silence of some MPs in neither category made precision difficult. And that is where there was much forecasting reliance upon luck and guesstimates to get to a 59% to 41% prediction.

Johnson was always going to have more than a majority, so the predictive range was circa 55% to something only slightly below the Theresa May figure of 63%. A halfway house of 59% based on the analysis of the party seemed reasonable.

Even harder to predict is what now happens to Johnson’s prime ministership. It is almost inconceivable to think of another Conservative leader soldiering on when more than four in every ten MPs from their own side have called for his head.

But you have to take into account Johnson’s suspension of what many may regard as the normal rules of politics. And at least one of his allies insisted he would defiantly stay on even if he only won by one vote.

So it may be unwise to place too much emphasis on the precedents of Margaret Thatcher, John Major and May departing either immediately or shortly after a bruising from their own side. Each departure was in different circumstances anyway.

At this point, the Conservatives seem certain to lose the two looming by-elections in Wakefield in Yorkshire and Tiverton and Honiton in Devon on June 23. In both cases the Conservative candidates are trailing their main opponents badly. But Johnson will be hoping to cling on after those big reverses until the summer parliamentary recess, beginning on July 22.

But his summer break will hardly be stress-free. Not long after Johnson cracks some jokes at the Conservatives’ annual conference in Birmingham in October, he will be confronted by a potentially very difficult report of the parliamentary privileges committee on whether he misled parliament over “partygate”.

Only if the prime minister survives that unscathed can he begin to set his own agenda again.